is big and beautiful

IN the grounds of Waddeson Manor in Buckinghamshire are four statues sculpted by Giacomo Cassetti around the turn of the 17 century representing the four known continents at that time - Europe, America, Asia and Africa.

They are the first of many for those making the trip to the house, once owned by the Rothschild family and now the largest property in the portfolio of the National Trust.

As I position the new Peugeot 508 SW - station wagon - next to them, I reflect on how appropriate it is that a load lugger should be photographed next to four women symbolic of travel and distance for that is exactly why many people will buy this car.

Hatchbacks, family cars and yes, SUVs, all command our driveways these days but there will always be a market for those who need extra boot space for work, travel or sport - and they will buy an estate car.

For them the 508 SW is an obvious choice. Despite the fact it is shorter than its predecessor, although lower and sleeker, it offers an outstanding amount of room in the rear - 530 litres increasing to 1,780 litres with the seats folded. The practicality continues with a hands-free automated tailgate, a two thirds/one third split rear seat and a ski hatch for the long and thin packages in your life.

I have always liked the 508 SW but in this new guise, it is even prettier. The chrome outlining has gone and it now boasts frameless doors, the same design features as the company's attractive Fastback and a very elegant rear hatch with the signature lion's claw taillights.

Inside, the elegance continues with quilted leather seats on the GT version, available in red leather in the GT-Line, lots of piano black gloss, Peugeot's sporty flat bottomed steering wheel and in the automatic versions I drove, a short and easily handled gearstick.

Like all 508 estates it comes with different driving modes - Sport, Normal, Comfortable and Eco.

There is only one manual engine in the line-up and that is the 1.5-litre BlueHDi diesel with 130ps otherwise all cars are automatic. Electric and hybrid cars are automatic so as we head down this route expect to see fewer and fewer manual cars.

Peugeot themselves will introduce its first all electric vehicle early next year - the e-208 with design cues from the Instinct concept car. Later this year the 508 SW as well as its stablemate the 508 will be available as plug-in hybrid versions.

Inside, the 508 SW is clean and uncluttered with fast keys to help find your away around the 10-inch touchscreen. It comes with MirrorLink, Apple Car and Android Auto as standard. Every car - except the base level Active trim - also features front seats that comply with the Aktion fur Gesunder Rucken (AGR) Action for a Healthy Back.

In the Peugeot's i-Cockpit, drivers can adjust the lighting and the engine noise as well as choose to be massaged. This is all about comfort and giving motorists the relaxing drive needed on long journeys.

It was easy and relaxing as we toured by highways and byways of Buckinghamshire but put it into Sport and it fairly took off at the lights.

It was slightly heavier than its petrol sibling but in some ways I felt the weightiness of this car suited the engine and once started it settled quietly into a smooth and easy rhythm.

The extraordinary Night Vision system Peugeot has developed is available as an option on both cars but other safety features include adaptive cruise control, lane positioning assist, automatic emergency braking, front and rear parking sensors and a 180 degree colour reversing camera as well as full park assist.

The new 508 SW is available from July 1 starting at £26,845 for the Active. It will be followed by the Allure, the GT-Line, the GT and a limited First Edition of only 75 cars.

Peugeot has gone from strength to strength in the past few years and recently won the mst dependable brand award in the latest J D Power Survey. It all augurs well for the electrification of its fleet which is just around the corner. As they say, the only way is up. 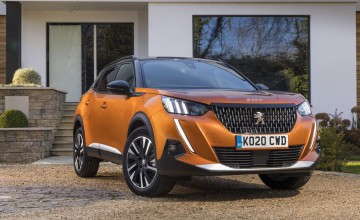