Style and sense in

By Ian Donaldson on 2019-06-10 - Ian estimates he has driven more than 6,000 cars (so far) in a road testing career that's taken him around the world. He has spent several years as a full-time staff motoring editor and is now a busy freelance journalist

YOU start off trying to be sensible - deciding the family needs an estate car with a big boot and strong dose of practicality.

For this is one handsome car, from the tip of its nose (and dramatic lights 'reminiscent of a lion's tooth', would you believe) to elegantly sloping and dramatically sculpted rear.

Checking the facts, you discover this gorgeous estate car actually has quite a lot less luggage space with the rear seats in use than the smaller and cheaper Peugeot 308 SW... but you don't care.

You'll comfortably live with a little less baggage room and, anyway, it's more spacious than a Ford Mondeo or Audi A4, neither of which you may agree has the catwalk appeal of the Peugeot.

And without a measuring tape a quick glance under the raised tailgate reveals a space easily big enough to cope with the family's fortnight away in the summer.

Plenty of room for people too, inside a car a tiny bit longer and taller (by about an inch in both directions) than its non-estate sibling, and with which it shares its engines and interior layout.

Expected best seller will use a 130hp diesel automatic, with prices from £28,445 for an Active trim version.

The current price list tops out an enthusiastic £40,944 for a First Edition with 180hp diesel and all the bells and whistles, from boot floor in Zebrano wood to soft nappa leather and night vision infra red camera that can spot a deer crossing in front of you in the dark.

Peugeot expects only a fifth of 508 SW buyers to take the manual gearchange route - which come attached to only that one diesel power unit anyway.

All the other versions of the newcomer, taking in 2.0-litre diesels with 160 or 180 horsepower or a 1.6-litre petrol with 180 or 225 horsepower outputs come attached to an eight-speed automatic transmission.

Peugeot thinks an overwhelming majority - some 70 per cent - of buyers will opt for diesel versions, a clear indication that most 508 SWs are going to end up as company cars.

Which means those elegant lines are only part of an equation where a diesel's better fuel consumption and lower emissions compared to the petrol equivalent make a compelling financial case.

Cleanest tailpipe figure - 101g/km of C02 - comes with the 1.5 diesel and manual gearbox, while the dirtiest (132g/km) is attached to most powerful engine in the range, the 225 horsepower and petrol powered 1.6.

Talking finances, Peugeot is beaming at the potential for the newcomer to hang on to its value better than some much posher-badged rivals.

Industry experts (who make a living predicting the future) reckon diesel models of the 508 SW will keep 35.7 per cent of their worth after three years - beating an Audi A4 Avant (33.4 per cent), Mercedes C-Class estate (30.6 per cent) and miles better than a BMW 3 Series Touring at 27 per cent.

Slipping into the driver's seat of the 508 SW reveals the latest version of Peugeot's i-Cockpit, launched to some controversy in 2012 and featuring a tiny steering wheel set so you peer over its rim to discover the instrument panel.

Well, it ought to be controversial no more. It works a treat in the 508 SW, making the car feel anxious to answer every call for a direction change with the alacrity of something smaller and sportier.

That little wheel fronts a dashboard with enough class, thanks to spot on choices for fabric and texture to make the opposition feel a bit outmoded. Only Peugeot's reliance on touch screen rather than old fashioned buttons for many minor functions earns a frown rather than a smile.

No complaints about the way the car rides our awful roads, though, and with enough quiet authority when pushing on to make either diesel or petrol power an entirely sensible choice.

An outing in a 180hp diesel showed 42.1mpg after a couple of hours enthusiastic use, a shorter outing in a petrol 508 SW with the same power gave 38.6mpg. So decent results both times.

PEUGEOT'S electrification programme has taken another step forward with the... 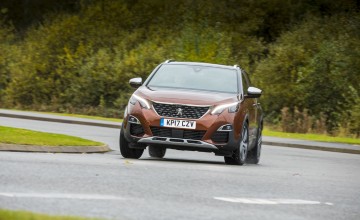