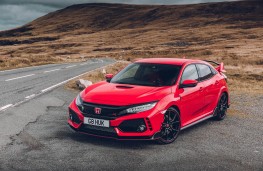 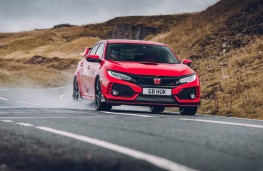 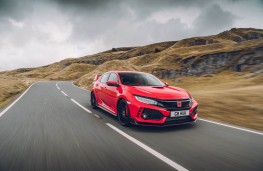 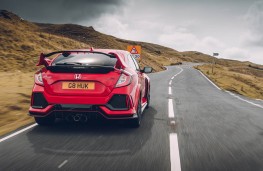 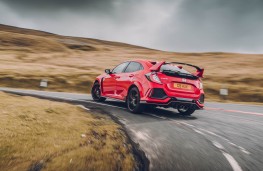 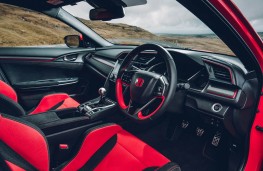 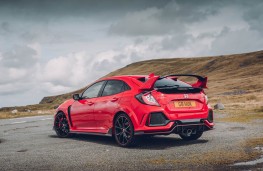 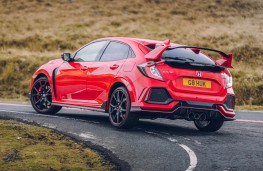 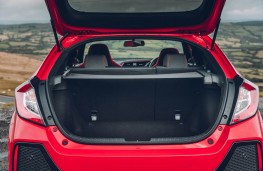 WITH its angular, aggressive styling, triumphant wheel arches, huge rear spoiler, air vents and duct, you just can't mistake the latest Honda Civic Type R for anything else on the road.

It's outlandishly unique, a true head-turner; it virtually screams ‘Look at me!"

Now, I could tell you about its vortex generator strakes, its advanced thermal management technology, its Dual-Pinion Variable-Ratio Electric Power Steering or its geometrical stability. But, I won't.

Instead, I'll just tell you this is a car engineered in the pursuit of speed - lower, longer and a teeny bit wider than its predecessor, it is the fastest-accelerating and quickest car in its class. It's insanely quick.

It's also a Transformer. Not quite Bumblebee perhaps, but it can switch from a comfy day-to-day family hatchback into a fire-breathing hot hatch at the flick of a finger.

Honda will tell you the Type R is the only car in its class which generates downforce at speed to help improve stability and performance, hence all those spoilers, wings etc have a purpose. I'm no aerodynamicist but it does feel firmly rooted to the road.

The Type R's turbocharged high-revving 2.0-litre petrol engine has been tweaked to deliver 316bhp. What's more, with 400Nm of torque available from 2,500rpm to 4,500rpm there's plenty of mid-range power too. It pulls magnificently even if you're already cruising in top gear.

There's a new Comfort mode, which is ideal for most UK roads - a new rear multi-link suspension and standard adaptive dampers smooth out lumps and bumps as effectively as many everyday hatchbacks, but also increases high-speed stability and under braking.

Mainly due to the roar from its 20-inch tyres and an engine which wants you to know it's ready to do your bidding in an instant, there are quieter motorway crunchers.

However, the real pleasure of the Type R is the way it behaves away from the maddening crowds of our motorways and A-roads in its default Sport mode.

It's a B-road thriller, its standard limited slip differential distributing power impressively to whichever wheel can cope with it best, meaning you can punch through corners with life-enhancing speed and stability.

Its low centre of gravity, wider track and tyres help deal with those higher cornering speeds - there's loads of grip and it just feels wonderfully poised.

Charging up and down the gears of its precise, slick and short-shitfting six-speed manual transmission is an enduring joy too. There is no auto.

And, if the speed and enjoyment has to come to an abrupt end, high-performance Brembo brakes developed specifically for the Type R, are confidence inspiring with real stopping power.

The track-focused and thoroughly bonkers +R mode is best left for the track unless you have access to a road with a surface like a billiard table.

The Type R's cabin is much improved too. Because of its new dimensions, there's plenty of space for four adults - only four seatbelts are offered - to travel in comfort.

The driver and passenger sit low in figure-hugging sports seats and there's plenty of adjustment for the driver's seat and steering wheel so no one should feel cramped behind the wheel.

A seven-inch colour display sits on top of the centre console. As well as being a touch-control device for the infotainment and climate control functions, it also integrates with a reversing camera, which handily helps mitigate for the poor rear view caused by the rear spoiler. It also provides full smartphone integration via both Apple CarPlay and Android Auto.

A seven-inch colour digital dash makes up the largest central section of the reconfigured instrument binnacle. Unique to the Type R, depending on driving mode, are specialised readouts, including an LED gearshift indicator light, boost pressure gauge, G-Meter and lap-time recorder.

Boot space is a generous 414 litres, which makes the Type R the most practical and versatile of high-performance hatchbacks. Ease of use is ensured by a wide and low boot opening and 60:40 split folding rear seats.

Now, there are actually two versions of the Type R available: the ‘standard' car - and I use that term loosely - and a GT.

The differences are purely spec-based. Priced from £31,550, the former comes with air-con, LED headlights, and keyless entry, and loads of safety kit including automatic emergency braking, a collision mitigation braking system, and lane departure warning.