By David Whinyates on 2019-07-01 - David is one of the UK’s most experienced motoring writers and was instrumental in setting up the Driving Force syndication service for Britain’s biggest regional newspaper group. Former Chief Motoring Editor of Trinity Mirror Regionals, he is Driving Force’s Consultant Motoring Editor and a director of Driving Force Media Ltd.

THE colour is called Orange Fury and figures finally released by Ford reveal that the latest Focus ST will ne more furious than ever on the road.

The latest petrol-engined version of Ford's hot hatch will shave almost a second off the 0-60mph time of its predecessor and will be even quicker through the gears than the last incarnation of the revered Focus RS.

When the latest ST was revealed back in March, Ford did not reveal performance information because the car was still undergoing homologation testing.

Now, with the new ST set to go on sale imminently, the company has released full details which credit the 2.3 litre,280bhp, petrol-engined version with a 0â62mph sprint time of 5.7seconds - 0.8 seconds quicker than the previous generation model - and a top speed of 155mph.

The increase in performance is down to twin-scroll turbocharging technology which contributes to segment-leading peak torque of 420Nm, and an innovative anti-lag system which, says Ford, enables rapid delivery of boost on demand.

"The all-new Focus ST is about more than just straight-line speed, but the ability to go toe-to-toe with the now legendary Focus RS over a quarter-mile sprint shows just how much the FordPerformance team has moved the game on in the last four years," says Ford's European performance director Leo Roeks.

"We've drawn inspiration from the Ford GT supercar, Fâ150Raptor pick-up, Ford Mustang and Fiesta ST to develop a Focus ST capable of punching you in the back the moment you hit the throttle," he adds.

While not as quick, the two-litre diesel version still achieves a respectable 0-62mph sprint time of 7.6 seconds, maxxing out at 136mph.

The new Focus ST, which will be available as both a hatchback and estate, the latter marginally slower off the mark, will make its public debut at the forthcoming Goodwood Festival of Speed.

Launch models will only be available with a six-speed manual transmission, but seven-speed automatic variants of the 2.3 litre petrol model will be introduced in the Autumn. 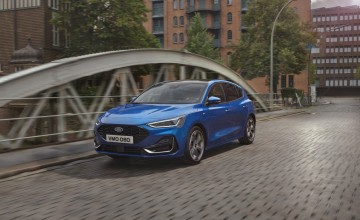 THE Ford Focus is getting a mid-life makeover with new technology and a fresh... 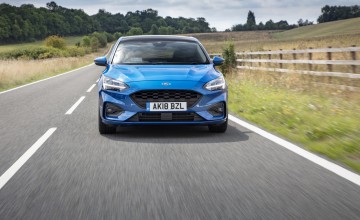