By David Whinyates on 2019-07-09 - David is one of the UK’s most experienced motoring writers and was instrumental in setting up the Driving Force syndication service for Britain’s biggest regional newspaper group. Former Chief Motoring Editor of Trinity Mirror Regionals, he is Driving Force’s Consultant Motoring Editor and a director of Driving Force Media Ltd.

IT'S been sixty years in the making, but the car which rewrote the motoring rulebook is about to write yet another new chapter.

Some six decades after Sir Alec Issigonis' revolutionary, transverse-engined, front wheel drive BMC Mini was first launched, the modern-day MINI, which is now one of the jewels in BMW's crown, is going electric.

The news is no great surprise, for the company has been teasing prototype versions of the new, battery-powered version for some time and the car has generated phenomenal interest already.

However, this is the first time that MINI has rolled out the final production model. Says David George, director of MINI in the UK: "We believe the new MINI Electric could be a tipping point for those who have been thinking about choosing an electric car, to take that step now. We aim to introduce a whole new group of drivers in the UK to the fun and cost savings of electric driving, in a way only MINI can."

Full production at Plant Oxford will begin alongside other MINI models later this year with first deliveries expected in March 2020. It will be available in three trim levels and is priced from Â£24,400 to Â£30,400 after the Government's plug-in car grant is taken into account, or on monthly lease from Â£299 a month over four years. Some 15,000 potential customers have already registered an interest and dealers have already opened their order books.

The electric MINI is based on the same bodyshell as the three-door hatch with a few minor changes. The front end features the MINI's hallmark hexagonal shape grille, but is closed, as the car requires less cooling. Embossed MINI Electric logos appear on the sides as well as on the tailgate and front radiator grille. The charging plug is located above the right-hand rear wheel, where the petrol filler would normally be.

Powered by the BMW Group's latest, most powerful electric motor with a maximum output of 184 HP and maximum torque of 270 Nm, the MINI Electric will accelerate from standstill to 62mph in just 7.3 seconds with a limited top speed limited of 93mph and a range of between 124 and 144 miles

The 32.6kWh battery pack sits in the vehicle floor between the front seats and below the rear seats meaning that there's no adverse effect on boot volume.

Inside there's a new digital dashboard with a 5.5-inch colour screen behind the steering wheel. As well as road speed, the display shows information on the charge level of the battery, the selected driving mode, the status of the driver assistance systems and check control messages.

In addition, details of the available range, current drive power, outside temperature, time and mileage are displayed along with traffic sign detection reports and directions from the navigation system.

Standard equipment includes dual zone automatic air conditioning and a navigation system with a 6.5 inch screen which can display the limits of the car's range and allows the driver to select a green route involving the lowest level of power consumption. 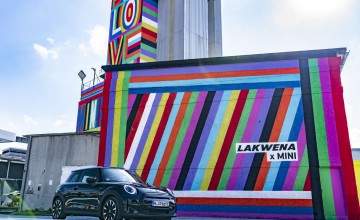 MINI'S Oxford factory will remain the heart of the manufacturer's production...