By Enda Mullen on 2019-07-13 - Enda is a business reporter for the Coventry Telegraph and is also the motoring editor for the Solihull News. He covers the Midlands automotive industry and in particular Jaguar Land Rover and Aston Martin product launches. He is a renowned automotive commentator.

THE term ‘Chelsea Tractor' became a much favoured term of abuse when large SUVs first started to become universally popular and it's a description one still sees bandied around from time to time.

It seemed to have been dreamt up specifically for people who favoured cumbersome, expensive and over-engineered off-road cars for the purpose of suburban toing and froing when essentially they were designed to traverse muddy tracks in the countryside.

Since SUVs became more plentiful and have started to come in all shapes and sizes, the term has become less used - perhaps because an awful lot of motorists now have them.

The desire to drive a vehicle with added ride height, chunky styling and the practicality that goes with that is less sneered at these days.

SsangYong's Rexton ELX could rightly be described as a Chelsea Tractor in the traditional sense of the term.

It's certainly a huge beast - through given the fact it offers incredible value for money compared to Land Rover, Audi, BMW, Mercedes or Volvo vehicles maybe it would perhaps be more apt to refer to it as a Chiswick Tractor, or maybe even a Chigwell Tractor.

Okay, forget the London/Essex location-inspired monickers, what I'm trying to say is it's as cheap as chips - considering what you get for Â£34,000.

In addition, from an inverted snobbery perspective, SsangYong vehicles even come with a bit of exclusivity. As the Korean brand that's the least well represented in the UK you won't see that many of them on the road.

The Rexton ELX is one of three Rexton models, it's a kind of stretch limo version of a standard model - SsangYong seem to specialise in doing such elongation exercises.

It looks the part - big and purposeful - and has three rows of seats meaning you can transport seven people in a reasonable degree of comfort.

On the inside it's fairly rugged, with rubber mats and instrumentation which has more of a basic than flashy character.

But it's surprisingly good. To simplify matters there's just one engine available - a 2.2-litre diesel - and that's your only engine option across the Rexton range, which starts at Â£27,500.

Four-wheel drive is standard and there is a transmission choice - a six-speed manual or a seven-speed automatic.

This was the automatic and as a transmission it seemed well mated to the 2.2-litre engine and helped make for surprisingly easy motoring around town - even if I didn't get to Chelsea.

Considering its bulk, the ELX felt surprisingly agile and manoeuvrable for everyday use - I never once cursed it when it came to parking in tight spaces or completing a three-point turn.

A lot of that is down to the on-board sensors and cameras but visibility generally is good all round too.

However, despite that it is huge, something I discovered when I volunteered to transport a table for a friend who had moved house and acquired some new furniture.

And it wasn't just any table but a non-collapsable solid piece of wood capable of seating eight.

While there wasn't a huge amount of space to spare, the ELX proved well up to the job. With all the seats folded it boasts 1,800 litres of carrying capacity.

In terms of driving and performance I also found the ELX to be good on the open road. Engine noise from the impressive diesel unit is audible but not intrusive and even though on paper it doesn't look to be too swift in the real world it felt far from being a sloucher - something that was aided by the excellent automatic gearbox.

Given its bulk it also handles rather impressively. Making swift progress in a variety of road settings, it never felt like it was afflicted with excessive pitch and roll. 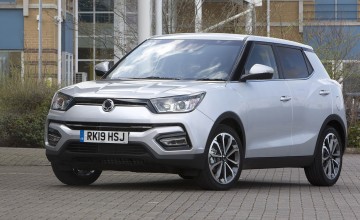 KOREAN manufacturer SsangYong has upgraded its compact SUV range of Tivoli and...

THERE'S no shortage of SUVs on our roads these days but very few offer the...

FIRST seen at the Geneva Motor Show in the spring, the latest SsangYong Korando...