By Chris Russon on 2019-07-25 - The driving force behind Eurekar. Chris heads up a team of motoring correspondents under the Driving Force banner. Prior to Driving Force becoming independent in 2010 he was Chief Motoring Editor for Trinity Mirror Regional newspapers. Chris has been writing about cars for almost 40 years. 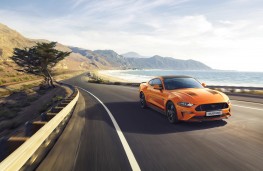 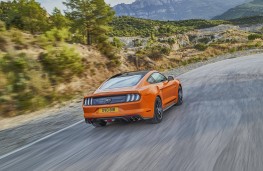 TO celebrate 55 years of the Mustang Ford is releasing a special edition.

Complete with special exterior features including side stripes, a vented bonnet and the option of a rear spoiler, the Mustang55 will be on the road later in the year.

The special model is powered by a 5.0-litre V8 engine while Ford is also upgrading the 2.3-litre EcoBoost model which now comes with Shelby body styling and an active exhaust as standard.

Roelant de Waard, Ford's European marketing, sales and service vice president, said: "Mustang is one of an exclusive group of vehicles to achieve more than half a century of continuous production, and customers' appetites for the world's best-selling sports car show no sign of waning,"

The Mustang remained the world's best-selling sports coupe for the fourth consecutive year in 2018, selling 113,066 cars and Ford sold 5,500 Mustangs in Europe in the first half of 2019, an increase of more than 5 per cent compared with the same period last year.

Mustang55 models are available in both fastback and convertible body styles and are equipped with a six-speed manual gearbox which feature a special moulded gear-shift knob, while 10-speed automatic models have an alloy metal gear-shift knob.

Prices for the new models are still to be confirmed but at the moment the Mustang line up starts from £37,685 for the EcoBoost model and tops out with the Bullitt model which is priced from £48,210.