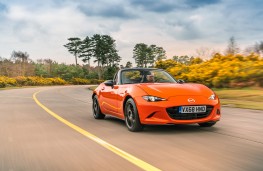 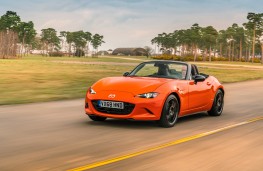 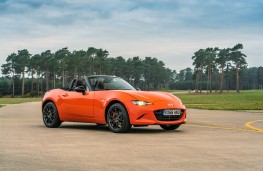 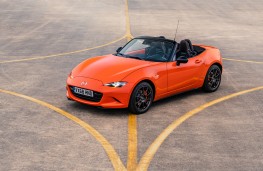 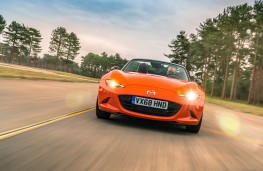 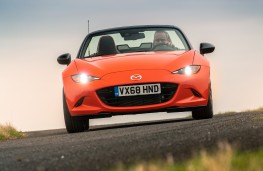 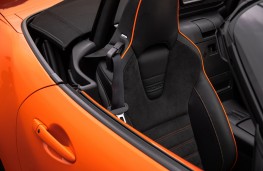 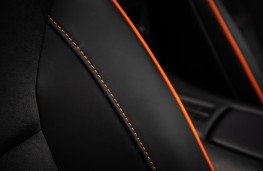 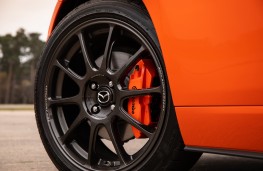 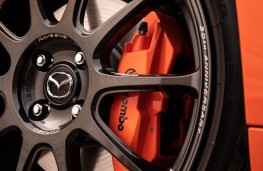 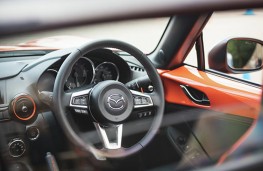 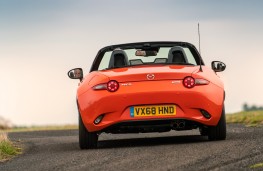 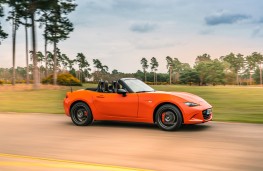 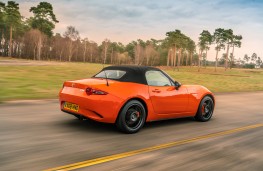 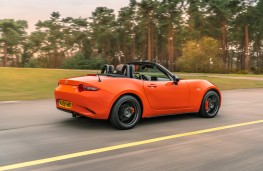 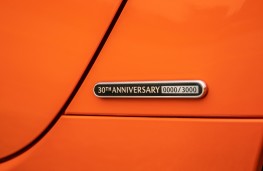 ORANGE is the colour Mazda has chosen to deck out its latest MX-5 sports car to mark its 30 anniversary.

And the colour scheme is everywhere on the special edition - from the paint job, throughout the interior and even into the stitching on the seats and steering wheel.

There are even orange brake callipers although the wheels themselves are 17-inch alloys finished in gun metallic grey and specially produced by the Rays company of Japan.

It's a classy take for the world's best selling roadster and the anniversary model is priced at the top of the MX-5 range - Â£28,295 for the roadster and Â£29,295 for the RF fastback with its retractable roof.

Apart from uprated Brembo brakes on the front wheels the car is mechanically identical to other versions powered by Mazda's 2.0-litre Skyactiv engine which now develops 184ps.

That fuel economy figure is highly accurate and we actually managed to better it slightly, averaging close to 42mpg over a good countryside drive where the car came into its own.

Its pure fun out on the open road, handles incredibly well and the six-speed manual gearchange is a joy to use.

The UK has 550 examples of the 30th anniversary model - 370 roadsters and 180 RFs - and that is the biggest single country allocation across the globe out of just 3,000 specials Mazda is producing to mark the milestone.

The current model, launched it 2015 has already notched up almost 18,000 sales with roughly half of those being the RF.

Around half of the 30th anniversary models have already been snapped up and with its ultra-bright Racing Orange finish - to give it its proper name - it is sure to turn heads.

Each model comes with a numbered plaque and anniversary badging on the rear wings. The RF also gets a black roof as standard fit.

The cockpit with an Alcantara finish on the dash and Recaro sports seats is the finishing touch and as Jeremy Thomson, Mazda's managing director in the UK, said: "In the three decades since the launch of the original model over 130,000 Mazda MX-5s have been sold in the UK and the company has produced some 52 special editions during the car's 30 years.

"This is a sports car that has resonated with enthusiastic British drivers ever since its debut and four generations on it's as popular as ever. Along the way, it has remained true to the original principle of being an affordable, lightweight and above all fun-to-drive roadster."

And he is not wrong. In the UK the car is without a rival in its price bracket and with mechanical aids such as Bilstein dampers, a strut-brace and a limited slip differential it is even a match for more expensive two seaters from the likes of Audi, BMW and Mercedes.