By Ian Donaldson on 2019-08-17 - Ian estimates he has driven more than 6,000 cars (so far) in a road testing career that's taken him around the world. He has spent several years as a full-time staff motoring editor and is now a busy freelance journalist

THE most successful car model name in history is back - after being hidden away for years.

So, give a big welcome back to the new Corolla, the twelfth generation with that badge on the back and approaching 50 million sales worldwide.

But, unlike the VW Beetle whose shape stayed recognisably familiar throughout its 21 million production run, the only obviously consistent feature of all those Corollas was the name.

Actually, there's a much deeper link than that. Over the decades since that first Corolla appeared in 1966 the name has come to mean family transport that won't break the bank - or break down.

If you think that sounds a bit dull, well that might explain why we lost the Corolla name for a few years as Toyota tried to add a bit of pep to its family car line up, giving us the Auris instead.

But now comes a car (built in the UK for Europe) that simultaneously brings back the badge and tries to inject a bit of pizazz into a car market where some competitors that are proper fun to drive.

The new Corolla starts at £21,305 for a 1.2-litre petrol manual hatchback and top out with the £30,345 Excel Touring Sports (estate) with 2.0-litre petrol hybrid powertrain and automatic gears.

Most popular engine is going to be the smaller, 1.8-litre petrol hybrid which saves £1,750 over the bigger unit and produces gently better economy at the expense of some performance.

Which brings us to the heart of this new Corolla, whatever is under the bonnet. Yes, this latest one is a perfectly decent drive, with enough eagerness to let longer journeys pass without complaint but it doesn't feel a bit sporty.

Which you will soon come to relish, especially as the car despatches that nasty bit of road on the way to work with barely a tremor and all in the sort of hush that makes for family peace as the long trek to your holiday hotel grinds on.

This latest Corolla is a genuinely calming place to pass the miles. The fact that it feels solidly put together in a gently polished fashion only adds to the allure.

A fuel consumption readout of 53.6mpg after more than 500 miles of mixed use was pretty calming too, producing the sort of diesel-like economy that a petrol engine with some gentle help from a self-charging battery hybrid system can provide without the downside of that fuel.

Take the estate version (called the Touring Sports in typical marketing speak) and for £1,700 more than the five-door hatch you add a thoroughly versatile load space that offers a generous 596 litres of luggage room with the rear seats in use and a van-like 1,725 litres with them folded flat. 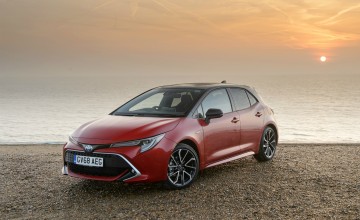 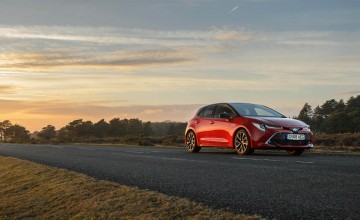