Lotus on the up

By Peter Hayward on 2019-08-19 - Peter has been writing about cars for more than 35 years producing road tests, second hand car tests, features on new and classic models, road safety and manufacturing. Has been a contributor to Auto Express, Classic Cars, Classic Car Weekly, Candis magazine and Japanese Motoring.

ANY car made by Lotus is a driver's delight - a machine that puts you at one with the road or track for an exhilarating taste of something that gets very close to motoring perfection.

These are giant killing sportscars made without compromise - the epitome of automotive design and engineering for the finest driving experience.

The company has just announced it plans to put the world's most powerful car into production - the all-electric Evija - but that's not going to be until next year and prior to that I was offered a short drive in three of its latest offerings around the roads of Oxfordshire.

The Elise Sport 220, the Exige Sport 410 and the Evora GT 410 were all available and each is powered by a mid-mounted supercharged petrol engine driving the rear wheels through a six-speed gearbox with the slickest - and most aesthetically pleasing - exposed cast aluminium and steel gearchange.

Colin Chapman, the man who started and headed Lotus for so many successful years, with numerous Formula 1 wins and class wins in the Le Mans 24 hours, had a simple philosophy: "To increase performance, add lightness".

So the latest Elise 220 - and the other cars in the range - are built with lightweight materials throughout.

The Elise weighs in at just 924kg, so it has a power to weight ratio of an excellent 238bhp per tonne - far higher than most sportscars.

The combination of light weight and power gives electrifying acceleration and it covers the 0 to 60 miles an hour sprint quicker than some supercars - just 4.2 seconds. Yet again because of light weight and engine efficiency, it can average 37 miles per gallon.

The supercharged power delivery means that power goes all the way from under 2,000 all the way to a screaming 7,000 revs with no gaps whatever.

And since the engine is behind your left ear, you get the complete amazing aural symphony.

It's a fantastic driver's car making you feel like part of the road and taking corners safely with tremendous levels of grip and road holding.

The non-powered steering is hard work when manoeuvring, but becomes alive and feeds information to the driver's hands once on the move.

The only downsides are the very difficult entry and exit between a high side sill and a low roof and the low speed ride, which could shake a few fillings loose.

The Exige Sport 410 is a road or track car based on the Elise but with a widened and lengthened chassis to accommodate a screamer of a supercharged 3.5-litre V6.

This is a mind-blowing tour de force of a car, reeling in the horizon faster than anything I have ever driven before.

The engine produces 410bhp, again with what seems like an endless surge of power all the way through its wide range.

But where the sound of the Elise remains much the same throughout its range, at 4,500 revs, the Exige starts to howl like a banshee and gives you an even harder kick in the back - if that were possible.

Light weight means the zero to 60 miles an hour sprint takes just 3.3 seconds and it will power on to 174mph. It's an amazing and intensely engaging experience that forces your full attention at all times on road or track.

The point and shoot non-powered steering is like part of you at speed and the unbelievable levels of grip and delectable balance, are truly superb.

Again though it has hard, uncompromising suspension, no power steering and the same difficulty getting in and out as with the Elise, making it rarely useable every day.

Finally I come to the car for all reasons - the Evora GT.

This is a beautiful longer and wider bodied version of the V6 410bhp Exige that's more civilised and driver friendly, with lower door sills making entry and exit quite easy.

It has larger interior space - it can even be ordered as a 2+2 - plus electric mirrors, cruise control and power steering.

At lower revs it's reasonably quiet but engine sound rises to the same demented howl when the supercharged 3.5 V6 gets above 4,500 revs and it has the same six-speed gearbox with the pleasing exposed gearchange.

However, the clutch is lighter than in the other models and there is an automatic gearbox option on the long personalization list.

Performance is obviously close to that of the Exige - completely amazing - despite some extra weight, and with tenacious grip and beautifully balanced roadholding it is sublime to drive.

The steering is still like a live thing in your hands and it's still a car that demands full concentration at all times. There is little rearward vision from the interior mirror because the engine's in the way but the door mirrors do the job extremely well.

The suspension is a little more forgiving and the power steering makes town manoeuvres far easier.

With such cars as these, Lotus is on the up again after a few quiet years and I for one applaud that. 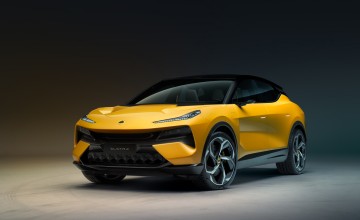