By Lee Gibson on 2019-08-25 - A journalist with nearly 30 years of experience on some of the biggest regional newspapers in England and Wales including the Birmingham Mail, Express & Star, Western Mail, the Sunday Mercury and Wales on Sunday. He currently edits the Sunday Mercury motoring pages as well as contributing to Eurekar. 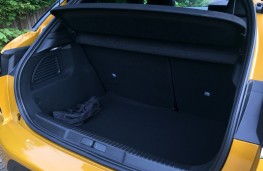 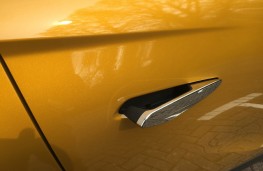 HAILING from the land of haute couture it should come as no surprise that DS Automobiles seems intent on making some serious design statements.

The avant garde approach is dialled up a notch with the arrival of the DS 3 Crossback - the second all-new model since the brand officially broke free of the Citroen umbrella.

Short but stocky and boasting a curvaceous form punctuated by sculpted lines and scoops aplenty, this is a car determined to stand out from the compact SUV crowd.

The main identifying feature is the shark fin silhouette built into the b-pillar, echoing the DS3 hatchback this motor will eventually supersede.

Look-at-me colours such as Millennium Blue, Ruby Red, Whisper Purple and Imperial Gold also help to grab the attention. Our model turned up sporting the latter which, given the contrasting black roof, detailing and alloys, prompted the other half to crack some joke about Bumblebee, of Transformers movie fame, having arrived in the driveway!

The flush fitting door handles, which deploy automatically when the key is near before disappearing back into the bodywork, are a gimmick nicked from Tesla and the super-posh Range Rover Velar and, as well as being a talking point, serve to enhance the upmarket, high-tech feel of this car.

Once you're inside this is even more evident in the high quality, soft-touch materials on show, which in our Performance Line car included Alcantara cladding along the dashboard offset with plenty of glossy, piano black finishes.

A distinctive diamond pattern dominates the dashboard, from the graphics on the seven-inch touchscreen, air vents and touch-sensitive switchgear right down to the push button ignition.

You won't find a car with cabin styling like this outside of the DS range and it certainly lives up to the prestige aspirations of this developing brand - but you have to wonder whether it will be too much of an acquired taste for some.

The entry-level three-pot we drove comes with a six-speed manual gearbox and, despite being the least powerful option, feels nimble and responsive, especially in urban traffic, with the quick, well-weighted steering actually making this quite an engaging and entertaining little SUV to drive.

One small niggle, though, is that space in the driver's footwell is tight, making navigating three pedals a slight challenge on manual models such as this.

A supple suspension keeps the ride comfortable over most surfaces but retains enough control to keep any roll in corners well within acceptable levels.

Practicality is usually a key consideration in SUVs, even small ones, but you will have to accept some compromise in this department if you want the swagger and style of the DS3 Crossback.

Head and leg room is okay for all but the tallest folk in the rear and two adults should be comfortable for most journeys but three would be a tight squeeze.

However, that distinctive raised window line, means you do feel a little enclosed in the back so those with claustrophobic tendencies would probably be advised to look elsewhere.

The boot, at 350 litres, lags a little behind some rivals but is spacious enough to cope with a weekly shop or a couple of weekend bags.