By Ian Donaldson on 2019-08-26 - Ian estimates he has driven more than 6,000 cars (so far) in a road testing career that's taken him around the world. He has spent several years as a full-time staff motoring editor and is now a busy freelance journalist

IF you've ever tried to build your dream car on a manufacturer's website you'll know how easy its is to head for bankruptcy as the extras add up.

Nobody does the tempting add-ons better than German car makers, where a sound system upgrade and softer leather can add thousands to the bottom line if you're not careful.

So it comes as a pleasant surprise to discover Audi with its latest revamp of the strong selling A4 range has piled on the standard kit count with goodies you might have expected to pay more for.

Doesn't sound very basic at all, does it? Those nice touches are found on the £30,750 Audi A4 35 TFSI Technik and, you'd think, ought to be enough for most potential buyers of this rejig of the popular saloon and Avant (estate) range.

For an extra £1,400 you can move from saloon to handsome and still bigger booted Avant, starting with the more powerful 40 TFSI at £36,985.

Whichever A4 you decide on - and the range now includes a mighty quattro all-wheel drive S4 performance version with, whisper it.. a potent diesel where a petrol engine used to hide.

That costs from £48,000 and thanks to an immense amount of pulling power (700Nm of it, for technical readers) will crack 62mph in 4.8 seconds while sipping diesel at a 40.9mpg average, helped by the application of a mild electric hybrid system that lets the car coast with the engine off for up to 40 seconds.

Back in the mildly more mundane world of the lesser powered new A4, Audi expects sales of petrol and diesel models to be split pretty evenly and, thanks to a newly introduced very mild hybrid drive system the entry level 35 TFSI records an average economy figure of 42.2mpg (with 129g/km of CO2) which must make it a winner in the company car stakes.

Audi says the bonnet, roof and boot lid remain unchanged but a bit of extra stylistic creasing and new lights, bumpers, air inlets, wings and doors will let the Audi spotter know there's a fresh new look to what very obviously remains the A4 of old.

Inside, there's a larger (10.1-inches) touchscreen dominating the centre of the dash which reacts smartly to a finger tap or a spoken voice command but unchanged is one of the A4's longstanding virtues - every time you slip behind the wheel you enter a world where quality reigns supreme.

Everything just looks and feels so well put together the A4 has you on its side before pressing the start button to see how things work out on the road.

Where the entry level A4 rides our dreadful roads with confidence while the seven-speed automatic gearbox (adding £1,550 to the bill) slurs the changes through as the car pulls convincingly towards cruising speed.

A brisk drive showed 40.3mpg on the (typically clear) dash readout - a decent enough figure to make many wonder at the thought of turning to diesel in these eco-conscious times.

More impressive still was the 35.0mpg shown after a briefer punt in the new S4, its 3.0 litre V6 diesel's 342bhp and prodigious pulling power making mincemeat of overtaking and close enough to the 40.9mpg official figure to convince that is here is a true cake-and-eat-it car.

At its most expensive, around £62,250 for the S4 Avant when it arrives, the newcomer inhabits a part of the market where you fancy sheer value rates a little below desire.

Turn the tables - elevating value and running costs to top slot - and the lesser A4 in saloon and estate guise continues to look an enticing proposition for the chap or chapess on the company climb. 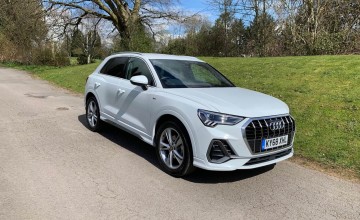 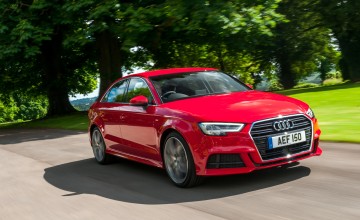 WITH the dangerous brightness of many LED car headlights these days and the...