By Ian Donaldson on 2019-09-01 - Ian estimates he has driven more than 6,000 cars (so far) in a road testing career that's taken him around the world. He has spent several years as a full-time staff motoring editor and is now a busy freelance journalist 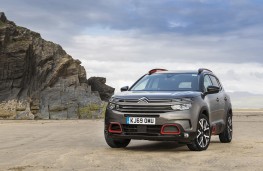 THEY'RE all at it - car makers are plugging into electric power as fast as they can as drivers prepare for a future full of charging points.

But the all-electric transport system is some years off, leaving plenty of life in more traditional forms of automotive power.

And with a change of number plate date to '69' from September there's a huge choice of new models to tempt us to take a leap into the future - whether electrically powered or not.

Vauxhall's new Corsa features a battery-electric version for the first time with an official range is 205 miles and is priced from Â£26,490, including the Government's Â£3,500 Plug-in Car Grant.

Toyota has high hopes for the new Corolla, the first Toyota to be marketed with a choice of two different full hybrid powertrains - a 1.8-litre, 120bhp version and a 2.0-litre producing 178bhp. The range starts at Â£21,305 with hybrid models starting at Â£23,755.

Meanwhile, one of the most significant newcomers to the surging SUV sector is the Mercedes GLB. It is aimed at family buyers who put versatility and roominess towards the top of their priority list. With 560 litres of cargo room, it is more spacious than both its main rivals.

Kia hopes to maintain its strong sales momentum with the new XCeed. Sportier looking than a conventional SUV, it will be available with a choice of engines - 1.0 T-GDi, 1.4 T-GDi and 1.6 CRDi. Pricing starts at Â£20,795 for the 1.0 T-GDi six-speed manual.

The fifth-generation version of the Renault Clio supermini is slightly smaller than the fourth generation car but some clever design packaging means there is actually more interior space, particularly for rear seat passengers, while the boot has also grown to 391 litres.

Hyundai is answering customers' demands for more SUV-style eco-mobility models by enhancing its popular Kona line-up with the launch of a new hybrid variant.

The newcomer offers an efficient full hybrid powertrain and features a range of technology including SmartSense active safety and driving assistance systems.

There's also a new large SUV to mark the French brand's 100 years in the shape of the C5 Aircross.

Skoda's newest model, the Scala hatchback comes with a choice of three well-equipped trim levels and a choice of three economical engines, two petrol and one diesel, all available with an optional seven-speed DSG transmission.

Fiat recently celebrated the anniversary of the 500 with a new 500 Dolcevita special edition that sports an exclusive Bossa Nova White livery, enhanced by a red and white beauty line drawn around the entire silhouette. The look is completed by elegant 16-inch white alloy wheels and fixed glass roof on the hatchback version.

As the new registration comes into force, Subaru will be joining the electric revolution with both the XV and Forester available as e-BOXER self-charging mild hybrid vehicles. Both models retain permanent symmetrical all-wheel drive go-anywhere capability.

Suzuki is offering attractive new reg deals, with the new Swift Attitude at the forefront. Based on the popular SZ-T model, it offers unique exterior design from its numerous styling upgrades.

Deals on offer until the end of September include the Swift Attitude 1.2-litre with manual transmission offering £500 customer saving for this period on this model only at a price of £14,099.

The ZS has been a big seller for MG but the arrival of an electric version - which will be sold alongside conventional petrol versions in the UK - is a major step forward.

The ZS EV boasts an impressive rapid-charging capability but owners can also plug in at home on a standard 7kW unit, enjoying a full charge in six-and-a-half hours.

Honda's newest models are in the HR-V and CR-V ranges. The latest version of the HR-V is the Sport, with its 1.5-litre turbocharged petrol engine developing an impressive 182ps.

The latest CR-V range features a clever hybrid version with a 2.0-litre, 143ps petrol engine combined with two electric motors - one for power and one to regenerate the battery.

Over at Ford, the new Focus ST comes dressed to thrill with sporty body tweaks and some special paint jobs. Like its predecessor Ford is making the Focus ST available either as a hatch or an estate with a 2.3-litre EcoBoost engine under the bonnet and priced from £31,995.

Nissan's latest flagship all-electric LEAF e+ variant will give eco warriors up to 239 miles of emission-free driving courtesy of a newly developed battery pack offering 55 per cent more capacity and around 25 per cent extra in energy density.