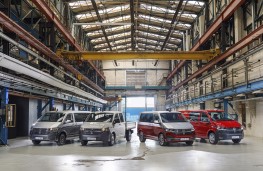 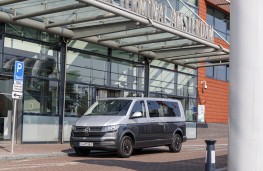 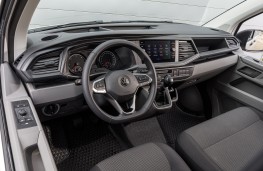 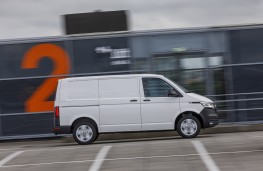 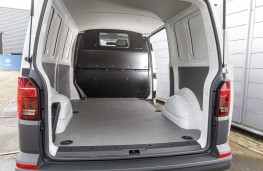 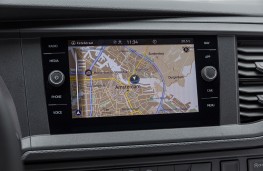 IT'S been around for 70 years in varying guises but the new Volkswagen Transporter - due here next March - has never been so car-like inside or had so much high tech equipment and all the latest digital gismos on board.

Van man or woman will never have had it so good whether driving a short-wheelbase or long-wheelbase, high or low roof version of the new Transporter with all the comparative luxury kit or any of the latest optional driving aids and safety systems available.

For starters, from the outside there's a redesigned front end with high-intensity twin halogen headlights and daytime running lights along with a large support frame that cuts vibrations in the front radar control box improving accuracy.

All new models now have a crosswind assist systems to help drivers with a more stable drive when motoring in high winds on exposed roads plus a much better and more precise steering system that makes parking in tight spots easier and safer.

In addition the list of options available again only further enhances the van's easier driveability and offers more safety than ever and include a park assist system that automatically steers the van in and out of parallel parking spaces.

There's also a rear traffic alert option with two radar sensors at the back warning the driver when reversing out of a loading bay and also if another vehicle is about to pass to stop until the danger has passed.

The bane for many van drivers is when slipping into a parking slot close to a wall or pillar and not getting too close but again a new option of a side protection aid warning will eliminate the potential problem.

It's inside the cab where drivers will notice the biggest improvements bringing them into the car-like digital age with new connectivity, safety and other features that includes a choice of three different infotainment systems, depending on model choice, but all with the latest aids such as sat nav, App-Contact and an integrated SIM card opening up a big range of online based functions.

The cab seats are also far more comfortable and with better lumbar support than before and all the controls are vastly improved aimed at making life on the road for drivers so much easier - and it is having now briefly tried four new variants of this latest Transporter.

Some of the driver assist systems have sensibly been carried over from the previous four year-old model such as adaptive cruise control, automatic post-collision braking system, high beam assist and city emergency braking.

As for engine choice VW has dropped petrol altogether because of poor sales so there's four different outputs - 90, 110, 150 and 199ps - all from the group's tried and trusted turbocharged 2.0-litre TDI diesel engine and all meeting the latest Euro6 standards.

Actual payloads have yet to be confirmed for the UK models, along with mpg and CO2 emission figures, although VW bosses have confirmed that as before the maximum payload will be 1,275kg, slightly less than the market leading Ford Custom.

VW is also making it simpler for buyers in that there's just three trim levels as such staring with the Startline, then the Highline and finally the Sportline.

The Shuttle with either five or nine seats will be offered as with the previous model with a choice of S or SE trim and Caravelle as with SE or Executive.

Order books open with full pricing and vehicle details from November with first deliveries due next March.

For the traditional van operator the new Transporter - officially called the Transport 6.1 - it will provide a much safer vehicle for everyday use along with the benefits of so many car-like on-board features never available previously.

Certainly there's improved all round refinements, more creature comforts but it still remain practical and versatile which are the key elements to this latest Transporter. 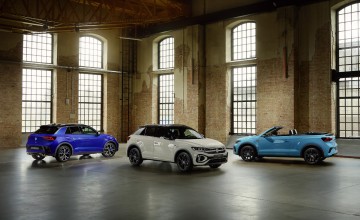 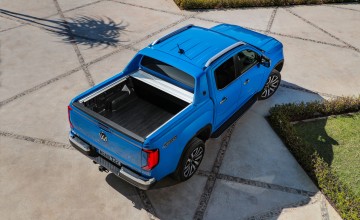 A NEW Volkswagen Amarok has been unveiled as the German brand prepares to...