By Ian Donaldson on 2019-10-20 - Ian estimates he has driven more than 6,000 cars (so far) in a road testing career that's taken him around the world. He has spent several years as a full-time staff motoring editor and is now a busy freelance journalist

MORE and more of us are reaching for the petrol nozzle when it's time for a refill at the pumps as sales of new diesel powered cars continue in steep decline.

Which poses more of a problem to buyers of something like the chunky Volvo you see here than for many other car buyers.

Put simply, the bigger and heavier the car the more diesel power made sense. Which is why you don't see many petrol powered Range Rovers, for instance.

Diesel stretches your income usefully further than petrol thanks to superior economy and it really shows in an SUV, always thirstier than the likes of a hatchback which weighs less and takes up less road space.

But diesel is doomed in the medium term, so we'd better come to terms with petrol in the tank - until we're all charging up a battery car and whispering our way out of town.

So the middling 32.8mpg recorded over a week's worth of varied roads in this petrol XC40 is the real world fact of life for someone wanting this car's winning mix of style, performance and sheer everyday liveability.

A diesel would do better, of course, and still provide a car that felt responsive enough to let a driver have some fun when the kids weren't on board and the family hound curled up asleep in the boot.

Or you could opt for a smaller petrol engine in the shape of a 1.5-litre three-cylinder unit that provided an impressive 47mpg on an earlier test and felt perfectly up to the task of moving this smallest (but not at all small) example of Volvo's current three-strong SUV range.

Whatever's under the bonnet won't change the fundamental rightness of the XC40, a direct cooly Scandi rival to the likes of the latest rather more in 'yer face Range Rover Evoque; both of them currently sitting in a sales sweet spot and making their company cash counters very happy.

And the XC40 is a fine place to spend time discovering how intelligent use of space and a clear and sensible layout can make driver and passengers equally happy.

That spacial intelligence stretches to every nook and cranny. Moving the big bass speakers from front doors to dashboard frees enough room for a laptop, tablet and water bottle, for instance.

It has also built in enough room for a couple of six-footers to sit comfortably behind a pair of similarly sized mates. The decently proportioned boot continues the cleverness with a parcel shelf that stores beneath the floor.

Specify your XC40 with an automatic gearbox and there's even space beneath the central armrest for a box of tissues.

Buy the XC40 in highish spec R-Design Pro guise and you'll enjoy headlights that bend round corners (brilliant) but rides too firmly on some surfaces thanks to sports suspension and big 20in alloy wheels. 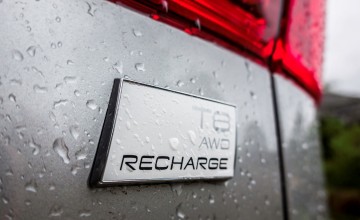