By Enda Mullen on 2019-10-26 - Enda is a business reporter for the Coventry Telegraph and is also the motoring editor for the Solihull News. He covers the Midlands automotive industry and in particular Jaguar Land Rover and Aston Martin product launches. He is a renowned automotive commentator.

SUVs are not generally renowned for being sporty, though in fairness the sports element in part refers to the active lifestyles often associated with SUV ownership.

Of course there are sporty SUVs, which is not surprising given the huge proliferation of SUVs in all shapes and forms.

The Cayenne was a huge hit for Porsche and enabled the company to invest hugely across its model range.

More recently the likes of Bentley, Lamborghini, Maserati and Rolls Royce have entered the sector too and their SUVs boast the kind of sportiness that at times seems to defy the laws of physics.

Such performance prowess in an SUV is of course beyond the means of many, given the corresponding price tags.

So, if you want a sporty SUV that is in the more mainstream category what are your options?

Again, this is a growing sector - there are Audi, BMW, Seat, Volkswagen and other variants.

At almost Â£43,000 the Skoda Kodiaq vRS is not exactly cheap but as a seriously performance-focused seven-seat SUV (it can also be bought as a five-seater) there's a lot to like about it.

Perhaps its greatest strength is that is can serve as a capable and versatile everyday family car - and for a large family at that - while also offering the kind of driving thrills not normally expected in a mainstream car of such shape and size.

Looks-wise it is set apart from more conventional Kodiaqs by some more aggressive styling touches, which include beefed-up bumpers, a distinctive grille that suggests it means business, gloss black roof rails, hard to ignore 20in alloy wheels and more besides.

One of the most surprising things about the vRS is that it relies on diesel rather than petrol power.

Under the bonnet is a twin-turbocharged, 2.0-litre engine which puts out 237bhp.

Perhaps even more surprising is the fact that if you were blindfolded and sat in the cabin you would be hard pushed to recognise it as a diesel when it was fired up.

This is because is fitted with something called Dynamic Sound Boost, an artificial engine augmentation note, which really comes into its own when you accelerate.

In truth it sounds far more like a gutsy old-fashioned V8 than an oil-burner, particularly when making swift progress.

It is quite an ever present, and while it's something that might irritate some I have to say I loved it.

The sound it makes varies according to the driving modes, so if it's not your cup of tea you can opt for eco mode (one of the optional driving modes) where it switches off.

In performance terms the vRS packs a real punch and will take you from 0-62mph in seven seconds.

While that might not be pin you back in your seat performance, given its overall size and bulk it gives it a very sprightly feel.

For a big vehicle it also handles impressively, with adaptive dampers and variable-ratio steering enhancing its agility.

The combined effect ensures it goes around corners rather well, managing to remain amazingly flat and composed.

Sporty flourishes complement the vRS's interior in what is a pretty premium feeling cabin.

It is also wonderfully spacious, even if the two rearmost seats are better suited to vertically challenged or younger passengers.

A seven-speed DSG gearbox comes as standard and if you're not using all seven seats or in the five-seat version it offers a cavernous boot area - 720 litres, which increases to 2,065 litres with all the rear seats folded.

On the technology front the vRS has a nine-inch central control screen to control navigation infotainment and connectivity.

There is little not to like about the Kodiaq vRS. If you're someone who would ideally be driving around in a sports car but has a family to think of it could prove a suitable compromise. 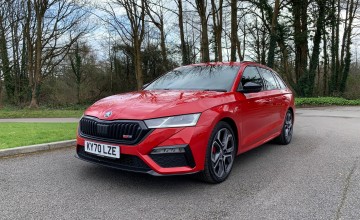 SKODA has launched the fourth-generation version of its flagship Octavia vRS in...

Skoda has a big birthday this year