By John Murdoch on 2019-12-14 - John is regional editor for Media Scotland's Lanarkshire and Lothian titles. Three times president of the Association of Scottish Motoring Writers he has been writing about cars for over 40 years. Recently awarded lifetime membership of the National Union of Journalists and was the subject of a motion in the Scottish Parliament congratulating him on his service to newspapers. 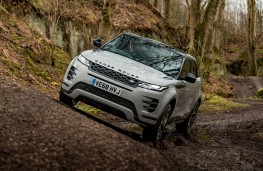 THE Range Rover Evoque became an instant style icon when it was first launched eight years ago.

Since then it has racked-up huge sales all over the world earning billions of pounds for the company and the UK economy.

Earlier this year I travelled to Greece to sample the second generation model which was updated with more luxury, extra tech and more efficient engines to combat a rash of new arrivals that are fighting for its share of the market.

I've just had the opportunity to spend more time with the new Evoque on our roads and it confirmed my opinion that it is still top of the compact premier SUV class.

The design team set out to correct some of the original car's faults while keeping all the good points and they were successful. Despite being almost the same length as the original, a 20mm longer wheelbase has allowed more rear legroom and a 10 per cent boost in boot space. Back seat space is still tight but it is better than before and the cabin is now much more luxurious.

All four-wheel-drive Evoques are now mild hybrids which helps with improved acceleration and also results in reduced fuel.

This time I have been sampling the 2.0-litre, 180bhp Ingenium turbocharged diesel engine linked to a nine-speed automatic gearbox and featuring all-wheel-drive.

It is good enough for a top speed of 127mph with the 0-60mph sprint taking 8.8 seconds and also delivers decent economy.

Considerably stiffer than the previous model the second generation Evoque offers better handling and refinement and it is usually very quiet although the engine can be a bit noisy if you push it too hard.

The interior is now really impressive thanks to cues taken from the larger and more expensive Velar.

A large 10-inch centrally positioned touchscreen moves forward to make it easier to read after the car is started and it sits above another screen that provides more information.

Owners can now check levels remotely or even heat the car before getting near it thanks to a number of apps.

Comfort levels are also improved thanks to new seats which provide good support and keep you firmly in place even when motoring around tight corners.

The suspension deals well with all types of surfaces and the ride and handling are a match for anything else in this class thanks in part to the adjustable dampers.

Land Rover has sensibly dumped the three-door and cabriolet versions thanks to low demand and they will probably not be missed.

Few Evoque owners will ever take their cars off-road but make no mistake this car is a proper Land Rover and is capable of tackling the rough stuff with ease.I did not venture into the wilds this time but in Greece the Evoque proved its considerable talents over all kinds of difficult terrain.

For owners who do wish to take up the challenge a Clearsight Ground View camera is available as an option and it allows the driver to see rocks and other obstacles which cannot be seen from behind the wheel.

My car featured all the creature comforts and kit you could want and as you would expect it also offered all the latest safety aids and equipment.