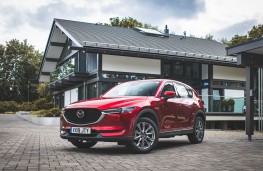 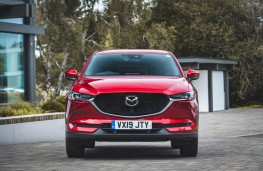 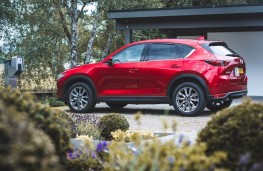 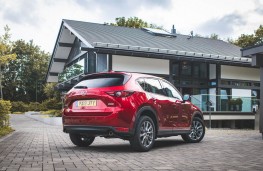 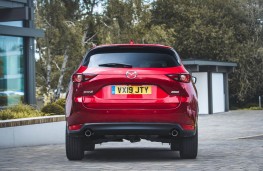 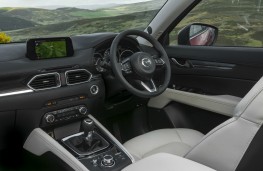 MAZDA has been making undeniably excellent cars for many years now and the new flagship of its highly popular CX-5 range is no exception.

In fact, the introduction of the GT Sport Nav+ trim takes the SUV to a new level.

Its sharp handling qualities and stylish looks are now properly partnered with a premium ambiance - there's real wood and satin chrome on the dashboard and door trim inlays which is matched to its leather upholstery and black roof lining to make the cabin Mazda's snazziest yet.

Though at first glance the second-generation CX-5 looks very similar to its predecessor, it's actually a smidgeon longer and a little lower.

Both the front and rear tracks are slightly wider than before and the wheels pushed as close as possible to the outer edges of the bodyshell to give it a powerful stance.

Across all the latest models, the legibility of displays has been improved for quicker and easier reading but the new seven-inch centre display is the first in a Mazda to use a special ‘optical bonding' system which prevents reflections and presents a clearer image.

The range-topper also comes with Mazda's newly-developed head-up display, which it has dubbed an Active Driving Display. It includes Traffic Sign recognition and projects full-colour information directly onto the windscreen within the driver's line of sight.

For added convenience, the GT Sport Nav+'s standard eight-way power seats allow for the automatic setting of the angle of the Active Driving Display.

As you'd expect from Mazda, the CX-5 delivers a superb driving position. Its designers have even raised the floor console to bring the gear level higher, and closer to the steering wheel, making the manual so much easier to use efficiently.

Not only that, but the centre and door armrests are now also set at near identical heights to provide the driver with a more balanced and comfortable position.

Practicality hasn't been ignored either, with improved cabin stowage and, on top-spec versions such as this, a powered tailgate.

The glove box is shaped to accommodate a 10-inch tablet and has been flocked-lined for protection of such items and prevent rattles. The capacity of both front and rear door pockets has also been increased. Sport Nav+ trims and above also now have a storage bin with twin USB ports within the rear seat centre armrest.

On the diesel, because of the AdBlue tank, the boot has a slightly lower 506-litre volume, but loaded to the roof with the seats down there's a huge 1,620 litres of luggage space.

The gutsy 2.2-litre 184ps SKYACTIV-D is only available in Sport Nav+ trim and above and is equipped with Mazda's ‘intelligent' all-wheel drive system. It produces a useful 445Nm of torque at 2,000rpm but doesn't redline until 5,500rpm. The twin-turbo layout provides minimal lag and powerful mid-range punch.

Officially it returns 42.8mpg and even with my heavy right foot pushing it forward it achieved a creditable 37.4mpg.

The clever AWD system uses 27 sensor signals to monitor road conditions and driver intentions to instantly determine how power should be split between the front and rear wheels. Its Active Torque Control coupling sends the right amount of torque to the right place at exactly the right time, maximising front and rear grip by precisely calculating how much grip is required at each wheel.

While the second-generation CX-5 inherits the proven MacPherson strut front and multi-link suspension system of its predecessor, numerous fine-tuning measures have been implemented. A new G-Vectoring Control (GVC) systems, makes it more comfortable, refined and responsive than ever.

GVC is Mazda's version of the torque vectoring control now found on many new cars. It momentarily reduces the amount of torque delivered to the front wheels, transferring a fraction more weight onto the front axle. This increases front tyre grip and allows the front wheels to turn more precisely. All in all, it makes the CX-5 a genuinely enjoyable machine to push on in.

Mazda's engineers have also paid particular attention to road, wind and tyre noise - and have succeeded. The CX-5, an SUV don't forget, is not only very comfortable and spacious but extremely refined. It's quiet an idle and on a cruise as hushed as the proverbial mouse with a religious bent.