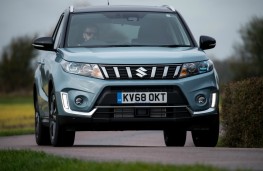 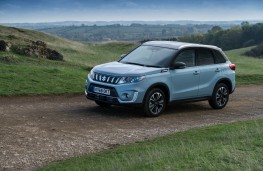 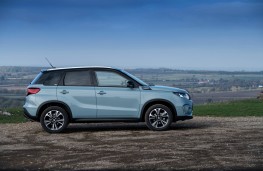 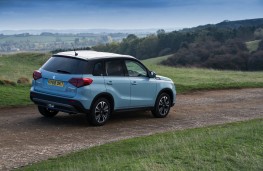 THERE are a few things guaranteed to bring a wide smile to even the most serious face.

Munching fish and chips as you sit on the beach, watching the sunrise over a vivid green field, the sweet aroma from the year's first freshly mown lawn. All magical experiences.

Well I can add another, from the world of motoring. No, not a Ferrari at full throttle - something far more attainable, but no less enjoyable in its own way.

I've recently stepped out of a little Suzuki Vitara which has the most responsive naturally aspirated 1.4-litre engine in just about any production car. And my grin spread from ear to ear.

Yes, this practical bundle of fun will set you back less than £25,000 but its credential for delivering maximum driver satisfaction alongside mud-lugging adhesion and school-run practicality are unquestionable.

The nub of the compact SUV is its 1.4-litre Boosterjet engine which has such razor sharp delivery of acceleration that it fools you into believing it is much more powerful than its not inconsiderable 138bhp.

This, together with a perfectly balanced suspension which manages to inhibit body roll without harming the ride comfort, results in maximum driver satisfaction.

Not that that this quality is the biggest selling point of the boxy Suzuki - most folk will buy it for its all-weather ability, its sensible approach and impressive manoeuvrability.

The free-revving engine is a delight and despite its small capacity produces loads of torque, producing lusty high gear acceleration. Row the gear stick a bit and you'll explore the hot-hatch nature of the car with its pin-sharp handling and steering which is a cut above most SUVs.

Statistics indicate a 10 second sprint to 62mph, but from the driving seat it feels noticeably brisker, possibly due to the rapid throttle response.

Despite twin axle, Allgrip drive, and plenty of onboard equipment, fuel is sipped at a miserly rate and emissions are held to an acceptable 139g/km. Our average fuel consumption during the 400-mile test was in the low 40s.

Slightly smaller than the obvious competition such as Qashqai, Tucson and Ateca, the flagship SZ5 has permanent four wheel drive and a comprehensive list of standard equipment which includes sat nav, suede covered seating, front and rear parking sensors and rear parking camera.

The cabin is a tad smaller than most of its class, but there's ample room for four adults with reasonable shoulder room. Leg room in the front is reasonable but those in the rear may suffer somewhat.

Boot space at 375 litres is less generous than some of the competition. This, however, expands to 710 litres when the rear seats are folded.

Cabin styling and decor is a big step up from Suzukis of old, but it is let down in places by some harsh and scratchy materials on the facia. The suede seating is a nice touch, adding a welcome hint of luxury.