By Mike Torpey on 2020-03-08 - Driving Force news editor and responsible for organising our daily output. He was staff motoring editor of the Liverpool Echo for 20 years.

IT could be described as one of the greatest tests of driving discipline - sticking to the suburban 20mph speed limit in a car that will do 190mph.

Vehicles with such seismic potential not only present almost irresistible levels of temptation but also feel like they are crawling along, when in fact they are travelling appreciably quicker.

The Bentley Bentayga Speed is one of those vehicles.

Heralded as ‘the world's fastest, most luxurious, SUV', the car builds on a tradition of Speed models dating back a dozen years.

But this one is the most potent yet.

Beneath the bonnet is an enhanced version of the company's 6.0-litre 12-cylinder engine, developing 626bhp and capable of scorching from 0-62mph in just 3.9 seconds thanks to a volcanic 900Nm, or 664lb/ft, of torque.

Four dynamic driving modes - comprising Comfort at one extreme, Custom for people wishing to create their own set-up, and Bentley and Sport at the other extreme - cater for every need.

And unique to this variant, the Sport setting has been recalibrated to boost not only engine response but also that of the eight-speed automatic transmission, the suspension and ride for a more thrilling drive.

There's also a more ferocious exhaust note, all-wheel drive and the most powerful ceramic brakes - engineered to withstand temperatures up to 1,000 degrees C - ever fitted to a Bentley.

The result is a refined brutality, the ultimate expression of which saw the Speed claim the production SUV record at the gruelling Pikes Peak International Hill Climb in Colorado.

Of course this is a vehicle costing a basic £185,800 before the various options most owners tend to specify that take the tab well north of £200,000.

So the last word in luxury is a given with the Bentayga, though Speed versions take on a more aggressive persona with the likes of dark tint headlamps, body-coloured side skirts, a tailgate spoiler and 22-inch wheels.

Move inside and crafted ‘swooshes' surround the doors, the edge of the seat cushions and backrest bolsters, the seats have a classy-looking Alcantara finish and the word Speed is illuminated in the treadplates.

The pin-sharp infotainment touchscreen is simple to use and the air vents with their organ stop adjusters and chrome bezels on the switches are classic Bentley.

Space is cosy and relaxing with room to stretch the longest of legs, and if the cavernous boot should ever prove insufficient then the rear seats fold 60-40, though not completely flat.

So loaded up and ready to go we embarked on a 300-mile round trip to the Lake District, taking in motorways, country lanes, suburban avenues and a few mountain tracks, all of which were eagerly swallowed up by the Bentayga.

Predictably the Bentley's road manners were out of the top drawer; smooth, supple and beautifully composed, while muddy fields and rutted tracks were tackled with ease. 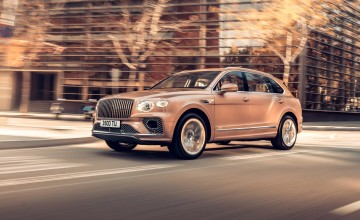 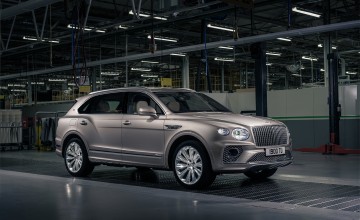