By Peter Hayward on 2020-03-26 - Peter has been writing about cars for more than 35 years producing road tests, second hand car tests, features on new and classic models, road safety and manufacturing. Has been a contributor to Auto Express, Classic Cars, Classic Car Weekly, Candis magazine and Japanese Motoring.

FORD'S Kuga, which is one of its most popular models, has the same name as the original British word for a kazoo.

For those of you who in this electronic age have never come across a kazoo, it's a simple musical instrument beloved of children and folkies, which you hum through to play.

You really needed to know that.

The present Kuga SUV has been around since 2012 and is really good to drive and well as being eminently family friendly and practical.

Most models are not four wheel drive even though they look the part, so if that's an important thing for you, make sure the model you're looking to buy has it.

Safety is very good with a number of different systems as standard, including lane-keeping assistance, and it has a five-star Euro crash-test rating.

It is reasonable to run, but the ride is on the firm side, so take it for a decent test drive before you buy.

As always, if any seller won't let you drive a car - for whatever reason - walk away. You need to know how it feels and you don't get that from the passenger seat.

Following an update in 2016, there were style changes to bring it into line with the rest of the range and improvements to the interior to allow for the latest infotainment system.

There have been numerous engine and gearbox options available but I'll concentrate on the main ones.

Economy under the latest calculation system ranges from 35 down to 30mpg.

The diesels make up the majority on the road and they start with a 1.5 which has 120bhp.

The set up is engineered for the best road manners rather than off-road work, but those with four-wheel--drive (4WD) are still more than capable on muddy tracks and wet fields.

Road holding is very good even when pressed, with well controlled body movement and not much roll. Grip is very good and the steering informative and direct.

I like the cabin very much. It's well built and stylish and better looking than that in many competitors.

The seats are well shaped and supportive and there's room for five over even quite long journeys, but the boot is on the small size for an SUV.

Equipment is good in most models, but the majority do not have sat nav as standard and that's niggardly on Ford's part as far as I'm concerned.

Many second-hand examples will have it of course, because it was ordered as an extra by the first owner or driver.

There is a wide range of models, so make sure you get all the kit you want.Mid-range ST-Line comes with alloys and parking sensors, an alarm, cruise, part-leather sports seats, roof rails, steering wheel audio controls and traction control.

Where fitted, the 4WD is an intelligent system that drives the front wheels normally, but adds power to the rear when slippery conditions are detected. 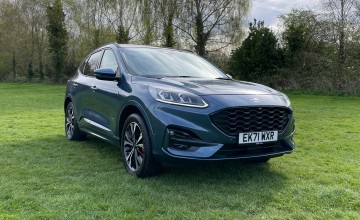