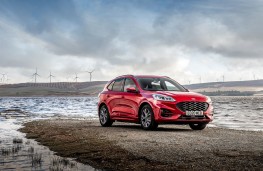 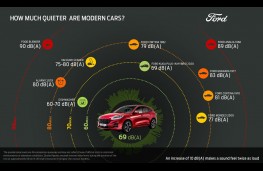 CARS are getting quieter on the inside and where once drivers had to shout to make themselves heard above certain speeds, modern day models are comparative oases of calm where conversations and music are clearly audible, even at low volumes.

A "Whisper Strategy" has been developed by Ford which delivers lots of small noise improvements around the vehicle.

The company says those add up to a big difference, helping make journeys more comfortable and less tiring for drivers and passengers.

For its new Kuga SUV, Ford examined noiseâgenerating elements from the suspension to the door seals to help find ways to optimise interior refinement.

Adding perforations to the Kuga Vignale's leather seat bolsters reduced the total area of flat surfaces inside the cabin, helping absorb rather than reflect noise.

"Our ‘whisper strategy' is designed to make journeys as quiet as they can possibly be - from absorbing sound through perforated seats to testing that involves listening carefully to the different sound patterns created by dozens of different tyres," said Glen Goold, Ford Kuga chief programme engineer.

Aerodynamically-tuned sound shields are added underneath the body of the vehicle that help limit road and wind noise entering from outside.

Ford engineers spent two years testing more than 70 different tyres over surfaces from smooth Tarmac to rough concrete and cobbles, in wet and dry conditions and at a range of speeds to find the exact specification that kept road noise to a minimum while still delivering high levels of comfort and grip.

And channels behind the exterior panels that allow hidden wiring and components to pass from one area to another are smaller and narrower to limit airflow inside the body.

The ability to drive without a petrol or diesel engine enables quieter journeys and the plug-in hybrid version of the new Kuga combines a petrol engine, electric motor and generator, and 14.4 kWh lithium-ion battery for zero-emission pure-electric driving capability.

A test* carried out by Ford showed that occupants in the new Ford Kuga Plug-In Hybrid experience interior noise levels that are just one quarter of those experienced by their grandparents in a 1966 Ford Anglia.

Most people perceive one sound to be twice as loud as another one when approximately 10 decibels higher.

To demonstrate the changes Ford has published the following list of peak internal noise at approximately 30 mph measured in 3rd gear (for manual models): 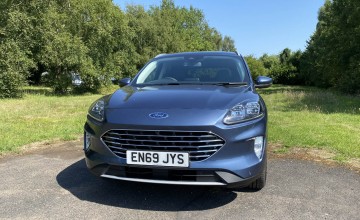