By Chris Russon on 2020-05-26 - The driving force behind Eurekar. Chris heads up a team of motoring correspondents under the Driving Force banner. Prior to Driving Force becoming independent in 2010 he was Chief Motoring Editor for Trinity Mirror Regional newspapers. Chris has been writing about cars for almost 40 years. 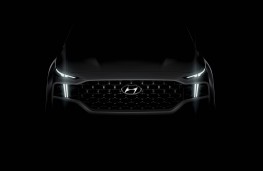 HYUNDAI has released the first glimpse of its new Santa Fe, the latest generation of the company's longest-running flagship SUV.

The Korean car maker says it will feature a charismatic exterior design, as well as interior design updates providing premium sensibility and comfort.

The wide grille is said to give the new Santa Fe a bold character, while the geometric pattern adds a stereoscopic aspect.

A new T-shaped design for the running lights completes the effect.

Among other enhancements, Hyundai will also introduce a new electrified powertrain line-up, including hybrid and plug-in hybrid options for the first time.

In addition, the new Santa Fe will be the first Hyundai model in Europe and first Hyundai SUV globally based on the all-new third-generation Hyundai vehicle platform.

The new platform allows for significant improvements in performance, handling and safety, as well as facilitating electrified powertrains.

The new Santa Fe will be available in Europe starting September 2020.

More information will be released in the coming weeks, the company says.

The Santa Fe is Hyundai's largest SUV in the UK and was first introduced some 20 years ago. The current model has been around since 2012 and currently is priced from Â£33,450.

Price revealed for sporty Hyundai i20