By Peter Keenan on 2020-08-09 - Peter has been with the Birmingham Post & Mail since 1990 and took on the role as motoring correspondent in 2007. He has been part of the Driving Force team for more than 10 years and his reviews are used nationwide by Trinity Mirror publications.

KIA'S latest stylish entry into the SUV oeuvre looks set to XCeed and excel in a packed marketplace.

As the appetite of buyers for all forms of sport utility vehicle seems insatiable, the Korean company squeezes another one - the XCeed - in between its Stonic and Niro models with the Sportage providing the full fat option.

The newcomer is the fashionista of the range with an eye-catching exterior and a smart cabin.

The XCeed uses the same platform as the Ceed hatchback which it is closely related to, but sits higher and boasts body cladding around the wheel arches and sills to achieve the necessary SUV look

The exterior boasts a purposeful air but is no muscle-bound hulk as smooth curves, dark and satin chrome radiator grille, neat 18-inch alloy wheels and LED daytime running lights give it a pleasing look and a sporty feel.

The rear also sports natty illumination and a high-mounted brake light continuing the good work begun at the front with a powered boot and tinted windows on the range-topping First Edition model the icing on a tasty cake.

The key fob can stay firmly in your pocket as keyless entry and a push button ignition provide access to the XCeed's many delights.

The multi-function leather-trimmed steering wheel is the driver's mission control providing access to the large touchscreen which features sharp graphics and an easy-to-use sat nav system.

Android Auto and Apple CarPlay connectivity are also included as is wireless phone charging and a reversing camera.

A foot-long digital cluster display plays host to an abundance of information led off by the speedometer and rev counter.

There are plenty of cup holders and cubby holes now essential for family motoring including a storage box beneath a centre sliding armrest situated between the driver and the front-seat passenger which I found handy.

There is plenty of room for four adults while an extra passenger can be accommodated in the back if the drop-down centre console containing two cup holders is left unused.

The rear bench can be split and folded to allow the already good-sized boot to be expanded.

The XCeed offers a pleasant experience behind the wheel negotiating the urban jungle with aplomb as well as being a decent motorway cruiser helped by a smooth ride and hi-tech driver aids.

Don't be fooled by the off-road looks though as the front-wheel drive XCeed is not one for the rough stuff.

The 1.4-litre petrol engine underneath the bonnet of this test vehicle gave plenty of get up and go while average fuel consumption for a week of mixed motoring came in at around 40mpg with emissions of 159g/km.

The seven-speed automatic gearbox is pretty slick giving seamless changes allowing 60mph to be achieved from a standing start in a shade over nine seconds on the way to a top speed of 124mph.

There is also a 1.0-litre petrol engine available as well as diesel options. 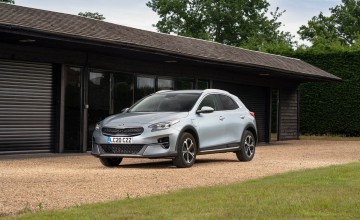