By Jon Smith on 2020-08-29 - Jon is a senior motoring journalist with a background writing for weekly/provincial daily and national newspapers and magazines. He has held executive news and features positions in Fleet Street and evening titles. Former Pirelli Motoring Writer of the Year winner. Currently specialising in product launches, safety issues, car tests and future motoring trends.

SKODA'S chunky mid-sized SUV might have been a bit late to the crossover party, but its combination of no-nonsense design, roomy cabin and VW Group engineering has helped it to make up ground fast.

Built on the same platform as the VW Tiguan and SEAT Ateca, the Karoq replaced the quirky, boxy-shaped Yeti which was loved by many but loathed by some.

Far more conservatively styled and hence possessing wider appeal, the new Skoda has managed to elbow out its rivals to establish its own niche in this crowded sector.

With Skoda's established formula of practicality and ruggedness, it's less overtly sporty than its sister, the Ateca and better value and more compact than its other sibling, the Tiguan.

And in flagship 2.0 TSI form, as driven here, it's something of a wolf in sheep's clothing. The 2.0-litre four cylinder injected engine pumps out a lusty 188bhp, giving it the sort of punch you'd hope for in a warm hatch.

Don't expect highly finessed handling and extraordinary agility, however - remember this first and foremost a family crossover with decent off-road capability rather than an out-and-out sports car.

But with a 0 to 62mph time in barely seven seconds, the Karoq tops out at 132mph, noticeably faster than the average compact SUV.

Designers have reached just about the perfect compromise on the suspension which soaks up almost all the bumps with degrading the handling or provoking too much cornering roll.

The superb seven-speed DSG twin clutch automatic gearbox together with grippy road holding and bags of punch are enough to put a smile on most drivers' faces. Twin steering wheel paddles add to the enjoyment.

Of course, there's a price to be paid for the racy performance which is inevitably in the shape of fuel consumption. Expect in the order of 34mpg on normal running and maybe up to 40mpg with a light right foot.

The cabin is smart and businesslike and free from gimmickry and razzle-dazzle. Although there's a neat touchscreen for the sat nav and parking camera, the heating and air con controls are via knobs set on panel below - easier to operate on the move.

Space for five adults is ample and despite the huge opening pan roof, there remains plenty of headroom. The boot is seriously large considering the car's external dimensions, being capable of absorbing 521 litres of cargo before the rear seats are folded.

There are also a couple of nice ‘simply clever' Skoda touches such as an umbrella fitted under the passenger seat and a detachable light in the boot.

With its black grill, and black roof rails and 19-inch Vega alloy wheels the Karoq Sportline looks one of the tastiest SUVs in the car park. 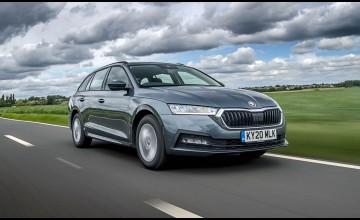