Golf GTI back in VW 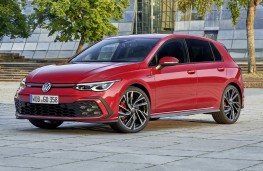 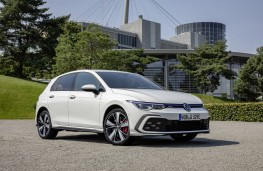 THE iconic GTI model is returning to the Volkswagen Golf line up as the German car maker expands the eighth generation range of vehicles.

Also new is a plug-in GTE model and a 1.0-litre mild hybrid offering.

The new Golf GTI will be available either with a six-speed manual transmission or a seven-speed semi-automatic DSG box with the latter priced from £34,960.

Fuel economy ranges from 36.7 to the gallon for the manual and 37.2 for the DSG with emissions of 169 and 168g/km respectively.

At the front, the Golf GTI gets an illuminated grille strip, as well as LED fog lights in the GTI's distinctive honeycomb design, with IQ.Light LED matrix headlights completing the display while at the rear a pair of chrome plated tailpipes sits beneath a specially styled GTI bumper.

A roof spoiler also marks out the back, as well as smoked LED tail lights with dynamic turn signals.

On the inside, the Golf GTI's seats are clad in a new iteration of the distinctive Jacara check cloth, while the sports steering wheel is leather-wrapped and heated, with paddle shifters for the DSG-model.

The gearshift knob is finished in aluminium, while a keyless entry and start/stop system, 3Zone climate control and electrically heated, adjustable and foldable door mirrors with built-in puddle lights all also feature as standard.

The new GTE also has a 245ps powertrain with its 1.4-litre turbo developing 150ps backed up by an electric motor adding the extra oomph.

Compared with the previous Golf GTE, the Golf 8 GTE's battery pack is 50 per cent larger, at 13 kWh, with a usable range in electric-only E-MODE of 32 miles.

The GTE features a purpose-built six-speed DSG transmission, developed specifically for use with plug-in hybrid models.

Two cables are provided for the Golf GTE - a 10 amp mains charging cable, and a 16 amp AC cable for wallboxes and charge points. With the former, the Golf GTE will take around five hours to charge fully at 2.3 kW, and with the latter at 3.6 kW, around three hours, 40 minutes.

A new drivetrain for the regular Golf model is also coming on stream with the 1.0-litre eTSI 110ps engine.

It's available only on the Golf Life trim and boasts fuel economy of 54.3 mpg with CO2emissions of 118g/km, making it the most frugal petrol-only option in the Golf 8 range, as well as the most affordable DSG-equipped option, at £25,1901.

The starter generator takes on the role of the alternator and starter, and also operates as a small electric motor providing a boost when pulling away.

The generator also starts the TSI engine, with the system allowing the car to coast with the engine shut off as much as possible while the car is in motion, for optimal efficiency.