By David Whinyates on 2020-10-14 - David is one of the UK’s most experienced motoring writers and was instrumental in setting up the Driving Force syndication service for Britain’s biggest regional newspaper group. Former Chief Motoring Editor of Trinity Mirror Regionals, he is Driving Force’s Consultant Motoring Editor and a director of Driving Force Media Ltd.

NOW here's a thing: the car hailed as "the best luxury sedan in the world" is becoming less popular as a chauffeur driven limo for the privileged classes.

Research carried out over the last ten years shows a significant shift in the usage of the Bentley Flying Spur from chauffeur-driven owners to customers driving themselves with passengers accompanying them.

The global research shows that the use of the sumptuous rear cabin of the Spur has declined with less than half of buyers travelling with rear seat passengers at least once a week.

And that's good news for those who relish their time at the wheel, for the data has been used to make the latest version of the Flying Spur more of a driver's car.

According to Bentley, the new V8 version of the Spur, which is revealed this week, offers a more driver-centric experience thanks to increased agility and a more characterful engine note. Compared with the existing W12-engined model it is 100kg lighter, helping it achieve up to 16 per cent better fuel consumption, increased range between fuel stops and a reduction in COemissions.

At the heart of this new model is Bentley's four-litre, twin turbocharged, 542bhp V8 engine, with maximum torque of 770Nm at just under 2000 rpm.

To maximise fuel economy, the V8 can shut down four of its eight cylinders under light-load conditions, when torque demand is below 235Nm and engine speed under 3000 rpm. The change is imperceptible to the occupants, says Bentley, with the process taking around 20 milliseconds - a tenth of the time it takes you to blink.

While it might be more driver focussed, Bentley hasn't ignored the needs of back seat passengers - even if they aren't quite such regular visitors to the sumptuous rear cabin which can be specified with seats for two or three.

The two-seat configuration makes the ultimate statement in design, comfort and luxury with a new central console which includes a housing for a five-inch touchscreen remote control. The remote allows access to a wide range of applications including control of all blinds, rear seat massage function and rear climate control and can be used to pre-store configurations for features such as mood lighting.

The rear compartment also features twin cupholders, extra stowage and the option of a wireless charging point. Two USB ports and a 12v power socket are fitted in the centre armrest, behind which is a new refrigerated bottle cooler which can accomodate six 330ml soft drinks, four 500ml bottles - or, naturally, two full sized champagne bottles

Electrically operated picnic tables mounted in the rear of the front seat can be deployed with a single press of a button. The veneer covered table lowers, levels electrically and reveals a leather trimmed surface with a recess for a pen or stylus.

The rear cabin of the Flying Spur is still the ultimate place to work or relax while on the road, says Bentley - even if fewer people are using it.

Customer orders are already being taken for the V8 and first deliveries are due before the end of the year in the UK and Europe, with other global markets following in 2021. 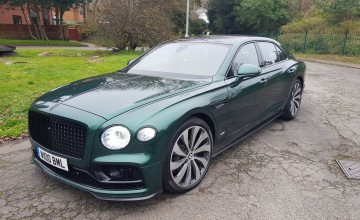 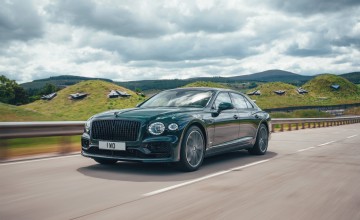