By Chris Russon on 2020-10-15 - The driving force behind Eurekar. Chris heads up a team of motoring correspondents under the Driving Force banner. Prior to Driving Force becoming independent in 2010 he was Chief Motoring Editor for Trinity Mirror Regional newspapers. Chris has been writing about cars for almost 40 years. 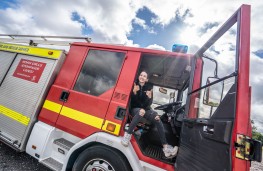 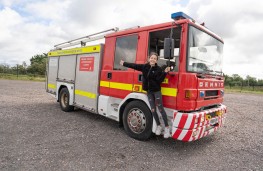 GETTING behind the wheel of a fire engine is a dream come true for many - and now that chance has become a reality.

Young Driver - which specialises in giving pre-17-year-olds their first driving experiences - has acquired a fire engine complete with sirens, flashing lights, pumps and hoses and is making it available to anyone who fancies a drive.

The fire engine is a Dennis Sabre model designed to carry 1,800 litres of water and six fire fighters in full kit.

Originally used by the Royal Berkshire Fire and Rescue Service, it was decommissioned last year and has been adapted by Young Driver for learner drivers.

Anyone over the age of 10, whether inspired by Fireman Sam or Chicago Fire, can now get behind the wheel and drive, manoeuvre, reverse and park the fire engine, accompanied by a fully qualified instructor.

The experience will initially be available at the NEC, Birmingham and British Motor Museum in Warwickshire on selected weekends this year and throughout 2021, with further nationwide venues to be announced shortly.

The first event, held on October 4 and which costs £49 per session, sold out in two hours.

Sue Waterfield, head of marketing for Young Driver, said: "Who hasn't seen a fire engine drive past and thought it would be good to have a go at driving one? Obviously we normally provide lessons for those under the legal driving age, but on our test day so many mums and dads wanted to drive the fire engine that we thought it made sense to open it up to kids of all ages, from 10 to 100!"

Motoring expert and Young Driver Patron, Quentin Willson, added: "Whatever your age it is great fun to drive on ‘blues and twos'. But for those just starting out on their driving journey, driving a large vehicle teaches the craft of driving, builds confidence, improves spatial awareness and shows youngsters what drivers of large vehicles can - and can't - see from the cab. Being able to successfully reverse a fire engine is a special skill that will benefit any driver - young or old."

Young Driver was established in 2009 with the aim of revolutionising the 'learning to drive journey', helping to reduce the high accident rate for newly qualified drivers by extending the learning period.

Research shows that early driver tuition can halve the likelihood of an accident in those dangerous first six months after passing a driving test.