By Lee Gibson on 2020-11-28 - A journalist with nearly 30 years of experience on some of the biggest regional newspapers in England and Wales including the Birmingham Mail, Express & Star, Western Mail, the Sunday Mercury and Wales on Sunday. He currently edits the Sunday Mercury motoring pages as well as contributing to Eurekar. 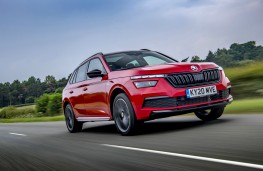 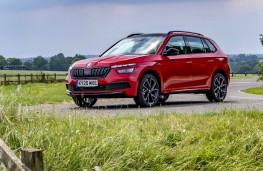 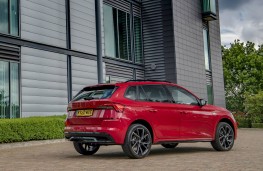 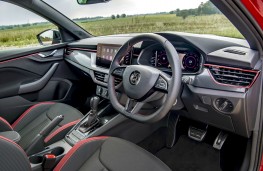 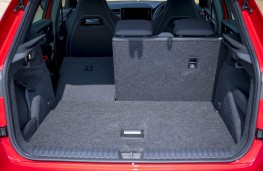 Undoubtedly inheriting some of its design language from those larger stablemates, the Kamiq also, however, mirrors the look of its closely related hatchback stablemate, the Scala.

An elevated ride height is a given, with 39 millimetres more ground clearance than the hatch, and all models get roof rails, but elsewhere the excessive faux ruggedness exhibited by some rivals is largely shunned.

The Kamiq, with its clean and sharp, but largely uncomplicated, lines is better regarded as a jacked up compact family car than a muscle bound wannabe 4x4 - which is actually quite refreshing and should serve to broaden its appeal.

A choice of four well-equipped trim grades and four engines, three petrol and one diesel, most available with manual and automatic transmissions, and prices starting from £18,295 will also help in this regard.

Monte Carlo trim sits at the top of the range, above S, SE, and SE L versions. The name is a nod to Skoda's rallying heritage and this spec adds a range of cosmetic enhancements that give the car an attractive, sporty style.

Most obviously setting it apart is the host of gloss black detailing, along with striking 18-inch black alloy wheels, a panoramic glass roof, full LED head and tail lights, and a sports front bumper. At the rear, there is a black diffuser and black boot lettering.

Inside, the Monte Carlo gets sports seats with contrasting black and red upholstery, a sports steering wheel and aluminium pedals as standard. Passengers also benefit from ambient lighting in red, a black roof lining and door sills with Kamiq branding.

In terms of technology, all Monte Carlo models feature a premium Amundsen infotainment system with 9.2-inch touchscreen as well as the ‘virtual cockpit' originally more associated with Audi but increasingly available across all VW Group ranges. This consists of a fully digital, customisable driver's display rather than a more conventional instrument cluster.

Opting for the flagship version gives a choice of two petrol power plants - a 115ps three-cylinder TSI unit or the four-cylinder 1.5 TSI in our test car, with a power output of 150ps.

This is the most powerful engine in the range and certainly best suits the sporty aspirations of the Monte Carlo trim, although its active cylinder technology - which automatically shuts down two cylinders when the load is light - still allows for decent fuel economy on the combined cycle.

It is a punchy unit with plenty of low-down pull which, mated to the standard compact six-speed manual transmission, offers an engaging and enjoyable driving experience.

There's definitely no lack of pace, with a 0-62mph time of 8.3 seconds and a top speed of 132mph, but throttle response is prompt too and the car proves agile and nimble in busy urban traffic while coping equally well on the open road, where it is smooth and refined.

There's decent feedback from the accurate steering and the suspension is sufficiently stiff to prevent excessive body roll, despite the Kamiq's raised centre of gravity, but not so much so that the ride becomes uncomfortable.

And while it's external dimensions remain compact enough to make manoeuvring around town and getting into parking spaces straightforward, the Kamiq's interior is, in typical Skoda fashion, deceptively spacious.

Rear head, leg and shoulder room are all claimed by the manufacturer to be best in class, which is easy to believe, while, at 400 litres, the boot is capacious enough to meet most day-to-day family needs.

A further 26 litres of storage is available in the cabin for passengers, who, in Monte Carlo spec cars, also get creature comforts such as dual zone climate control, digital radio, navigation, Android and Apple smartphone connectivity, cruise control, keyless ignition and privacy glass. 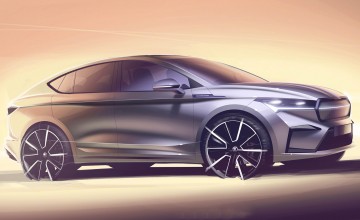 SKODA has released a sketch of its new all-electric Enyaq Coupe iV ahead of the...