By Chris Russon on 2020-12-23 - The driving force behind Eurekar. Chris heads up a team of motoring correspondents under the Driving Force banner. Prior to Driving Force becoming independent in 2010 he was Chief Motoring Editor for Trinity Mirror Regional newspapers. Chris has been writing about cars for almost 40 years. 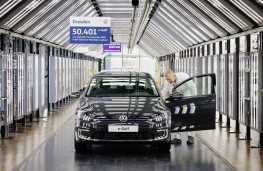 THE last electric version of the Volkswagen Golf has rolled off the line as the German car maker gears up to produce more examples of its new ID.3 EV.

Danny Auerswald, head of plant at the factory, said: "The end of the e-Golf is also the start of the final preparations for the ID.3. In just a few weeks, we will be opening the next chapter."

The ID.3 is the first vehicle to be based on Volkswagen's Modular Electric Drive Kit.

The platform was developed specifically for e-cars and production is due to begin at Dresden towards the end of January.

Volkswagen is already building the ID.3 at its Zwickau factory in Germany where more than 28,000 have been produced since its launch in September.

The basic version of the ID.3 is expected to cost less than £30,000 excluding Government grants and is due on sale early in 2021.