By Mike Torpey on 2021-01-30 - Driving Force news editor and responsible for organising our daily output. He was staff motoring editor of the Liverpool Echo for 20 years. 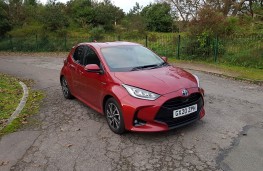 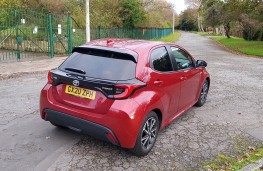 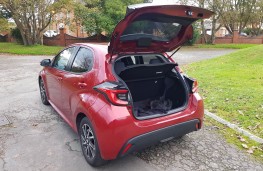 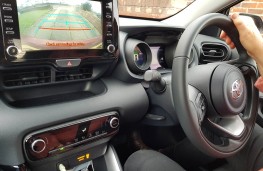 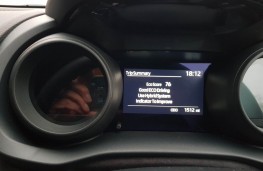 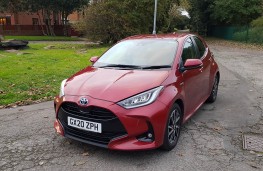 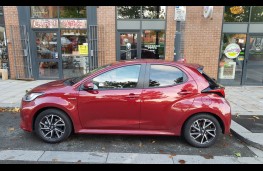 Not a bad first effort for someone who doesn't consider himself to be the most sympathetic of drivers.

For those yet to drive a hybrid car, and specifically the new Toyota Yaris supermini, that eco rating will pop up in a read-out just ahead of the steering wheel at the conclusion of each journey.

It's just one of various efficiency features on stream from a manufacturer that has no less than nine hybrid electric vehicles across its model range.

In fact over the past 23 years the Japanese company claims to have saved more than 120 million tonnes of CO2 worldwide, compared to equivalent petrol engines.

The new fourth generation Yaris is the most recent of these hybrid models, having only hit UK streets in the last month.

Up for grabs in four equipment grades badged Icon, Design, Dynamic and Excel, plus a special high-spec Launch Edition, the Yaris costs from £19,910 rising to £24,005 for the launch model.

Not exactly cheap for a small car, but it's one with big ambitions and much to feel proud about.

For instance it is the first to sit on Toyota's new small car platform and is engineered to be the safest compact model in the world.

That's down to a significant increase in body rigidity and a leap forward two generations in the Toyota Safety Sense with its active technologies, plus a number of new systems making their debut in a Toyota.

Then there's the Yaris' styling design, succinctly put by chief engineer Yasunori Suezawa as capturing the stance of an athlete on the starting blocks. Design-wise it's up there with the smartest around.

Well made and simply laid out, with a cockpit designed around the concept of "eyes on the road, hands on the wheel" and featuring an eight-inch multimedia screen at its centre, the cabin feels of a high and durable quality.

And while interior space is pretty much par for the course, the rear doors seem to have a concave effect that makes sitting in the back seats a touch more roomy and comfortable, for two passengers at least.

Will it prove sufficiently accommodating for everyday family use? The answer here is positive too - luggage space boosted by a split floor with extra room underneath, while the rear seat backs drop down to add to the 286 litres of room in the boot.

The point about opting for a hybrid though is to consume less fuel and belch out fewer filthy fumes, at the same time benefiting from lower road and company car tax.

And in common with many of its stablemates, Yaris hits the nail on the head. Beneath the bonnet is a three-cylinder 1.5-litre petrol engine coupled with an electric motor to produce a total of 114bhp.

The upshot of that combination is a 0-62mph acceleration time of 9.7 seconds - made increasingly exhilarating thanks to the car's low centre of gravity - and top speed of 109mph, but more significantly an average fuel consumption figure of 68.8 miles per gallon.

While ‘official' figures can often be misleading that wasn't the case with the Yaris, our own fuel return over 200 miles of mixed town and rural motoring coming within a mile of Toyota's own mark.

It's an enjoyable car to drive too - nicely poised, energetic and smooth through the electric CVT transmission featured on our Design grade model that is expected to make up the lion's share of UK sales.

There's also the reward of a greater capability to operate on electric power alone with zero emissions, at slightly higher speeds and over a longer distance - especially in urban conditions.