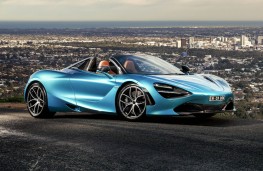 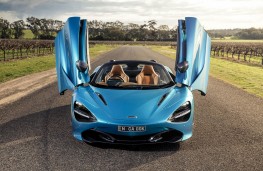 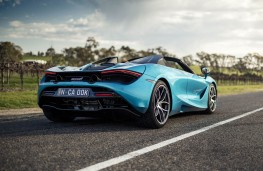 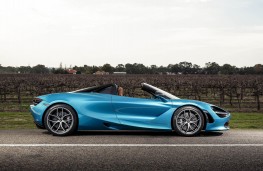 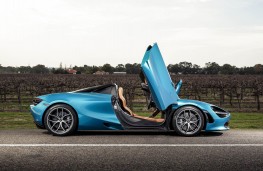 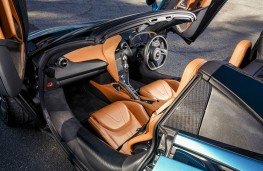 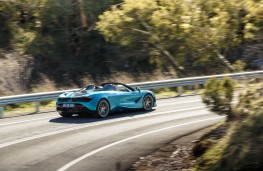 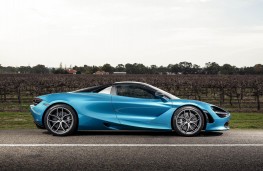 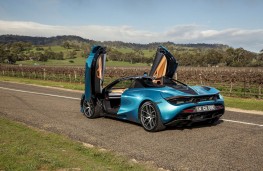 WITH its spectacular looks and performance to match the McLaren 720S is one of the world's great supercars, so how could it be improved?

By taking the roof off, of course.

Most convertibles sacrifice speed, handling and ride for wind-in-the-hair driving fun but McLaren has pulled the trick off without sacrificing any of its astounding performance.

Because the 720S uses a carbon fibre chassis, no extra strengthening is necessary to maintain rigidity. So, the new 720S Spider has all the performance and handling prowess of the Coupe.

Both are powered by the same mid-mounted 4.0-litre twin turbo V8 which generates a phenomenal 710bhp and 770Nm of torque, which means an almost unearthly 0-62mph of 2.9 seconds. Overtaking, at any time, in any gear, is a breeze.

The 720S Spider will continue accelerating to a CoupÃ©-matching top speed of 212mph with the roof raised or ‘just' 202mph with it down.

It officially returns 23.2mpg but can easily hit 26 or 27mpg on a long haul if you spare the turbos. Over 460 miles I managed 23.1mg but my average speed was just 38mph due to heavy traffic on one long drive.

Remarkably, the Spider weighs just 49kg more than the Coupe, mostly due to the roof and tonneau system.

Weighing 1,332kg, it's 88kg lighter than its closest competitor. The patented roof system also delivers the fastest operating time in the supercar class, lowering or raising in 11 seconds at vehicle speeds of up to 31mph.

To accommodate the roof, the Monocage features a new carbon fibre upper structure engineered to sit as close as possible to the air charge coolers and intake plenum. This also delivers 58 litres of luggage space under the tonneau cover with the roof raised as well the 150 litres under the front bonnet.

With the roof up, the McLaren is very refined but you can drop the electric rear window if you fancy letting a little bit of V8 excitement in.

Owners can also specify a £7,500 electrochromic roof, that can switch rapidly between transparent or tinted at the touch of a button. When the ignition is off, the glass reverts to its tinted setting, helping keep the cabin cool during hot days.

Just like its Coupe sibling, the 720S Spider is not just a supercar for the weekend, or a monstrous track beast though. Unlike many supercars, its ride quality is superb - relaxed even when cruising - and also has a tinge of practicality because of its stowage space. Both have real ‘daily driver' credentials.

As a McLaren Super Series car, it is designed to offer an extreme level of performance but, because of its actively hydraulic damping system, in Comfort mode, the Spiderhoovers up bumps and lumps better than many top-line GT cars and sporty saloons. Sport prioritises handing, while the Track mode ensures maximum outright performance and grip.

The system constantly studies cornering, acceleration, braking, aerodynamic forces and the changing road surface and, in milliseconds, adjusts the firmness of the dampers to ensure all four of the McLaren's P Zeros remain consistently in touch with the road surface. It breeds confidence.

Naturally, it's on the track that the McLaren comes alive. The seven-speed gearbox is sharp and seamless when shifting and all that aerodynamic and mechanical expertise combines to provide incredible amounts of power and massive reserves of grip.

Superbly balanced, it gives you the confidence to push harder through the fastest corners without having to wrestle for control. However, unless you're a pro-driver, you'll probably not even get close its full potential.

However, then comes the options - an extra Â£45,810 on the car I was driving. That included the Carbon Fibre Exterior Upgrade pack (Â£5,820) and the electrochromatic glass roof. Most owners may want the Â£4,900 sports exhaust and Â£4,720 360-degree parking assist system but other options could remain off the spec sheet.

Like the Coupe, the roadster features McLaren's unique folding driver display. Fully open, the display presents all the usual and necessary information on an upright high definition digital panel. At the touch of a button, it disappears to a slim F1-style display with only the absolute minimum of information displayed.

Thanks to the wide range of adjustment, most drivers will find a comfortable position and the two-seater also provides plenty of comfortable interior space for all but the tallest occupants.