By Ian Donaldson on 2021-03-22 - Ian estimates he has driven more than 6,000 cars (so far) in a road testing career that's taken him around the world. He has spent several years as a full-time staff motoring editor and is now a busy freelance journalist

ON the way to a first drive in Mazda's new all-electric MX-30 the price went up £500 before the car had turned one of its chunky alloy wheels.

Blame it on the government - which that very day lopped £500 off its previous £3,000 electric vehicle sweetener grant.

Which must mean the Whitehall mandarins reckon we don't need as much tempting to turn to plug-in power as we used to, hoping to turn a trickle into a charge.

So, this latest from a carmaker - which still predicts a solid future for fossil fuels - now starts at £26,045 and tops out at £30,245 after you've sliced the now less generous grant from the bottom line.

In new electric car land, that's not a lot. Especially when you clap eyes on your first MX-30 and take a look around and inside. It's a handsome devil, with a trick up its sleeve that will have the family's youngsters desperate for a go in the back.

With its mix of frontal ruggedness and hints of coupe round the rear, the MX-30 stands out from today's mid-size melange of identikit SUVs that seem to vary only by the badge on the bootlid.

But the newcomer's real trick is the way you get to the back seats. First, open a front door and then find the chunky handle on a back one - and flip it open 'the wrong way.'

Yes, like very few cars since the days of coachbuilt Bentleys, the rear doors are hinged at the back. It means you can open up the entire side of the passenger compartment, making it a doddle to load a baby seat in the back and adding vastly to the owner's cool quotient at the school gates.

Pulling this looker along is an electric motor, powered from a battery that gives a maximum (official) range of 124 miles and which can be recharged from 20 to 80 per cent in 36 minutes if you can find a punchy enough charge point.

But, I hear you ask, will it really manage only 124 miles from full to panic stations? Doesn't seem a lot, does it? Barely enough to get us to granny's and back for her birthday...

Well, here we discover that most of us drive only about 20 miles a day. So stretching an electric car's range comes with consequences - much higher cost and much more weight (batteries are so heavy) - that mean modest mileage munchers end up paying for what they won't need.

Of course, it also means the MX-30 is going to adorn the driveway of many smart suburban homes, sharing space with a bigger and fossil-fuelled machine that will manage the granny outing and more.

Looking inside again, we discover an environment that looks more restrained modern than space-tech and all the better for it. Playfully, Mazda has used patches of cork on centre console and door grips in subtle homage to its Japanese roots as theToyo Cork Kogyo Corporation.

Thankfully, Mazda has resisted the temptation to rid the cockpit of every conventional switch and rely on stabbing a touchscreen instead, leaving enough physical buttons to let drivers keep their eyes on the road instead of looking down in despair to cool the cabin a little more, for instance.

Settled into the comfy front seats and temperature set to your liking, it's time to set off. As ever with electric power, walking speed is accompanied by a near total silence that then blends into the usual mix of tyre and wind noise that comes with any car, regardless of what's under the bonnet.

Step off is typically electric car smart (with a modest 143bhp, not in a rocket-like Tesla way) with the 0-62mph time of 9.7 seconds merely brisk in today's terms. Top speed may be academic, but is 87mph if you're bothered.

More important might be the too often divide between an electric car's official range and reality.

So, it's good news time; on a 50 mile run on roads from town and village to dual carriageway and with the air con warming a chilly day, the car used 51 miles of theoretical range. It's an honest little chap, then.

Rides well too, with only a little of the distant thump that carrying the heft of a battery usually brings. It's confident in corners, although some way from the sporting intent its MX badging might hint at.

You won't lack for creature comforts aboard your new MX-30, with even the entry level SE-L Lux (£26,045) having 18-inch alloy wheels, LED headlights, radar cruise control, parking sensors and a reversing camera.

For £27,995 the range is rounded out with the First Edition, limited to 350 cars and throwing in the choice of a couple of metallic paint finishes.

Which one to choose will depend on depth of pocket. Choosing one at all will depend on your lifestyle. If it suits you, the MX-30 shouldn't disappoint. 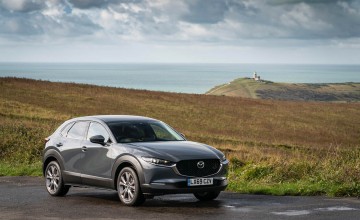 I ADMIT to being a little puzzled when Mazda revealed the CX-30, after all, it... 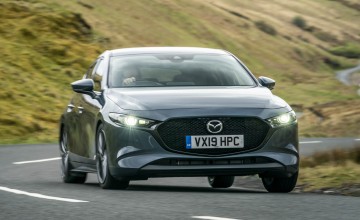 Razor-sharp Mazda reaches for the sky