By David Whinyates on 2021-03-24 - David is one of the UK’s most experienced motoring writers and was instrumental in setting up the Driving Force syndication service for Britain’s biggest regional newspaper group. Former Chief Motoring Editor of Trinity Mirror Regionals, he is Driving Force’s Consultant Motoring Editor and a director of Driving Force Media Ltd.

IT'S been dubbed the most dynamic road car in Bentley's 101-year history and, with a top speed of 208mph and a 0-60mph sprint time of only 3.5 seconds, the new Continental GT Speed certainly lives up to its name.

Bentley's renowned six-litre W12 engine has been tweaked to deliver 650bhp and 664lb ft of torque while the steering, chassis and braking systems have all been upgraded to provide what the Crewe-based company describes as the ‘ultimate performance-focused interpretation of the world's benchmark luxury Grand Tourer.'

In order to get the most out of the 12-cylinder engine's mighty power, Bentley's engineers have equipped the Speed with electronic four-wheel steering, all-wheel drive and an electronic rear differential together with newly-engineered carbon ceramic brakes.

There are only minor changes to the Continental GT's muscular bodywork including a dark tint radiator grille and lower bumper grille, more sculpted sports sills and discreet Speed badging in chrome on the front fender.

While the emphasis is very much on performance, the Speed still comes with all the little luxuries you'd expect from a Bentley including unique trim with hide and Alcantara diamond-quilted upholstery. A vast array of personalisation options are available to buyers with a choice of 15 main and 11 secondary hide colours and a range of veneers.

The new model builds on a long tradition of Speed variants which were originally introduced with the first-generation Continental GT Speed in 2007. Bentley have not divulged what the latest version will cost, but given the standard Continental GT's Â£159,900 price-tag, you're unlikely to get much change from Â£190k.

Even at that price, there'll be no lack of takers for a car which Dr. Matthias Rabe, the company's board member for engineering calls "the most powerful expression of Continental GT valuesâ¦"

He adds: "The world's most luxurious Grand Tourer is now truly more capable than ever before, with a new sportier edge which will appeal to performance-focused drivers."

GT is a very overused abbreviation but fully justified as a suffix to the... 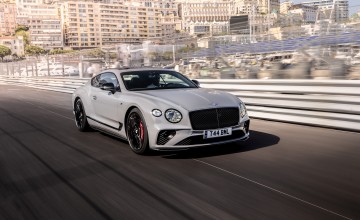