By Mike Torpey on 2021-03-27 - Driving Force news editor and responsible for organising our daily output. He was staff motoring editor of the Liverpool Echo for 20 years. 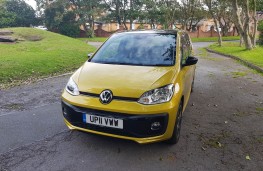 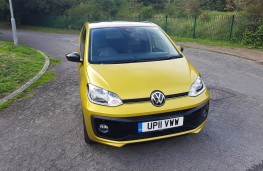 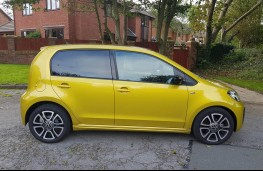 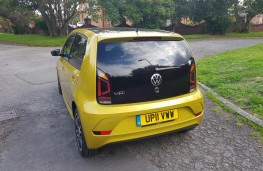 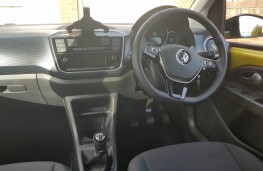 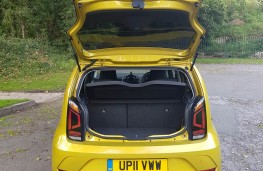 THE smallest car in the extensive Volkswagen range remains one very much in the ascendancy.

Well established as king of the city slicker scene, the up! sits below the Golf and Polo as one of three hatchbacks in the VW line-up.

And while the up! has actually been around for just on nine years it continues to scoop accolades like fallen leaves - in fact last year it was Volkswagen's most decorated car by the UK media.

A refresh just before the lockdown kicked in brought extra safety and connectivity kit as up! also became the first model to wear the new VW logo.

The new-look range features no less than seven spec grades - up!, White Edition, Black Edition, Beats, R-Line, GTI and e-up! - though it's the entry level version costing from Â£11,840 that's expected to account for 45 per cent of sales.

That figure refers exclusively to petrol models though, because the new fully electric e-up! is already making waves with its range of 159 miles on a single charge.

Otherwise a single 1.0-litre three cylinder petrol engine is up for grabs across the standard range, producing 60ps compared to the fiery and more expensive GTI's 115ps unit.

But what up! buyers are getting is an absolute cracker of a small car, for a multitude of reasons.

It's true, a performance figure of 0-62mph in 14.9 seconds may sound lethargic. In reality though - and this is the case with many small cars - the acceleration feels a lot swifter and whether you be driving round suburban roads or tight country lanes the car's compact nature makes it both nippy and planted.

It's a real joy to drive - light, manoeuvrable, airy and easy to park, even in tight spaces.

The up! is also well designed to the point that anyone sitting in the front would be unaware they were aboard a city car, while both the rear passengers have ample legroom.

Some manufacturers would put an extra belt in there and call it a five-seater - Volkswagen have made the sensible call and ensured an airy, non-claustrophobic environment for those in the back.

And even though the boot is pretty small, it is at least deep and has a split level. Overall luggage space actually totals 251 litres.

As for kit, there are alloy wheels, an in-car entertainment set-up with five-inch colour screen, smartphone navigation interface with cradle, DAB radio, Lane Assist and curtain airbags on every model.

More goodies join the party as you move through the models, our tested R-Line variant being near fully loaded.

Of the added cost options the Cruise and Park pack at £440 and featuring cruise control, parking sensors and rear-view camera is money well spent, as is the Honey Yellow Metallic paint with Fusion cloth upholstery and Black Cube upper dashboard panels at £575. 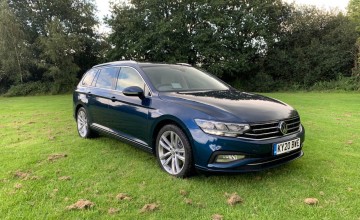 VOLKSWAGEN'S Passat Estate has long been a favourite with British motorists...