By Edward Stephens on 2021-04-03 - Edward edits the motoring pages of the Birmingham Mail and Birmingham Post as a freelancer after more than 35 years on the staff. Also writes on motoring for various other newspapers, trade magazines and well known websites. 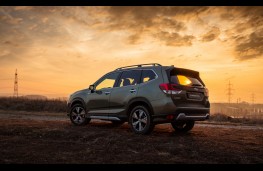 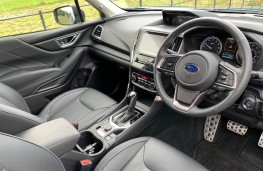 WE'VE all been there. Driving along and you get distracted by something happening at the side of the road.

But if that happens this summer and you're driving one of Subaru's new Foresters expect a ticking off from the car.

For the all-new Forester e-Boxer is packed with safety features, one of which uses an interior camera to monitor your face to make sure your eyes are on the road rather than being distracted by other things.

So if you stare out of the side window for more than a safe time be prepared for a loud noise - and I don‘t mean from your other half sitting next to you.

Now in its fifth incarnation the Forester is one of Subaru's top selling models in Britain and is an ideal choice for anyone looking for a spacious SUV with the added bonus of off-road capability and plenty of ground clearance without the bulk of a large 4x4.

It's both longer and wider than the previous model but at the same time has a more stylish, attractive design with nice contours in the bodywork which sets it apart.

And those extra inches mean more interior space for travellers, particularly more leg room for rear seat passengers who really can stretch their legs out.

But one of the biggest changes to this new generation model is the addition of an electric motor to back up the traditional and much loved horizontally-opposed Subaru Boxer engine.

The motor works in conjunction with the engine to improve both acceleration and torque while at the same time boosting the car's economy by around 10 per cent.

In pure EV mode you can - should you want to - travel at up to 25 miles per hour for up to about a mile and the battery is recharged from the engine so no messing about with having to plug in anywhere. In reality, however, engine and motor will almost always be working in unison.

Forester buyers are often people who need off-road or towing capability and both sectors will find the addition of the electric motor means a dramatic improvement to their needs.

And while it operates permanently in all-wheel-drive when the going gets really tough you can use the new version of the X-MODE system to dial up a setting for either "snow/dirt" if you are driving on snow or gravel or "snow/mud" when the ground is soft enough to bury the wheels.

Opt for the XE Premium model and you get a good selection of onboard features including leather upholstery with heated seats in both the front and rear, electrically operated front seats with memory, a heated steering wheel, a glass sunroof and power tailgate which you can set to operate at what ever height suits you.

Despite the length of the Forester parking is made easy by a colour reversing camera which shows what's behind you on the satellite navigation screen while a second, smaller screen gives you a side view so you don't kerb the alloys.

From the driver's seat the Forester feels well put together and has a reassuringly rugged feel to it. It's not the quickest car away from the traffic lights but you never feel as if it's lacking the power to deliver when you need it.

Slightly noisy on initial start up the sound soon drops to a very quiet, refined level. The Lineartonic continuously variable auto box works very well and is super smooth in operation while paddles behind the steering wheel allow for manual gear changes.

A centre-set eight-inch touch screen in the smart leather-covered dashboard gives easy access to most onboard features and a second screen set slightly higher gives a permanent readout from the on-board computer. Onboard safety features are almost too long to list and include rear cross traffic alert, rear vehicle detection and reverse automatic braking which brakes the car if you are about to hit something at the back. 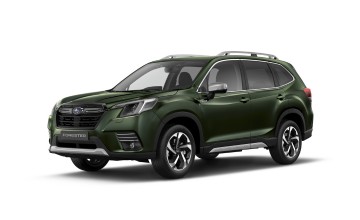 MORE safety equipment is being fitted to the Subaru Forester as the SUV gets a...