By Ian Donaldson on 2021-04-11 - Ian estimates he has driven more than 6,000 cars (so far) in a road testing career that's taken him around the world. He has spent several years as a full-time staff motoring editor and is now a busy freelance journalist

AS we move ever faster to an all-electric future on the road even firms famed for off-roading need to join the current trend.

Which brings us to the latest version of Jeep's Renegade, smallest and most popular of the firm's current offerings and now available with a battery and electric motor to add some green credentials to the mix.

Fully charged, this chunky plug-in hybrid off-roader will take you around 26 miles before the conventional petrol engine cuts in to turn your Renegade back to a more conventional machine.

Before that happens you'll be driving a car that makes very little noise and has all the spirit away from the lights you'd ever need. It also makes huge sense for anyone using this Renegade for business, thanks to its low CO2 rating.

Off-road you needn't doubt this part-electric machine's ability to tackle slopes and surfaces you couldn't stand upright upon.

Which, even if you never venture further away from Tarmac than a grassy car park, is an essential part of any Jeep's authenticity.

With five traction settings to choose from, including mud/sand and snow and one for rock that lets the electric motor on the rear wheels strut its stuff to maximum effect.

Back in the more mundane world of school runs and outings to see granny, this top Trailhawk version of the Renegade range has now to justify its very significant price hike over a non-electric version.

Well, average economy of 43.7mpg over a working week, with one battery top up included, showed promise. A shorter trip, starting with a full battery, was even more encouraging, at 72mpg.

There's also plenty of space up front, but rather less in the back. Boot space suffers a bit by donating some room for the hybrid battery, but should still comfortably suffice for the weekly grocery shop - and the back seats easily flop down if you need to pack in a bargain bundle or two.

Less impressive are a sat nav screen that decides to ignore your settings every time you start the car, leaving you to tap away restoring the map look you want.

You may not be impressed either by the dense blackness of a cockpit that makes locating heating controls a pain, or heated seats and steering wheel settings which demand several prods at the touchscreen to engage.

On the move the car copes well enough with most surfaces, only displaying a touch of unwanted firmness on bumpy side roads. The strident way the petrol engine sometimes kicks in to help the electric motor also does nothing for this Renegade's sense of quiet authority. 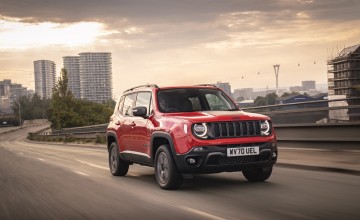 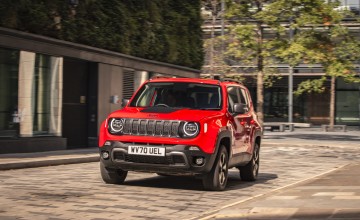