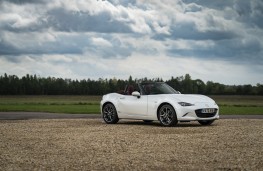 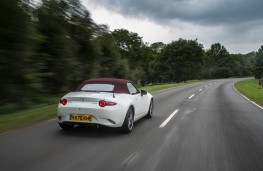 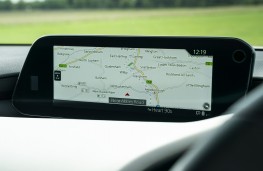 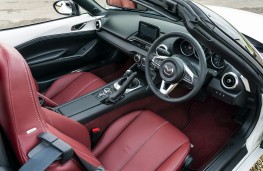 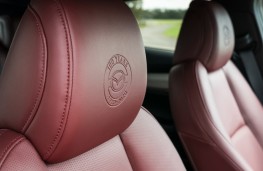 PRODUCING a special edition of the iconic Mazda MX-5 takes, well, something special.

Arguably the best pound for pound two seater in the world, it has a rich and proud history since first arriving on the scene back in 1990.

It has always been a thrilling drive, with an improved, gutsy two-litre petrol engine, mated to one of the finest gearboxes around and superb handling.

It also offers practicality with a decent sized boot and a soft top that folds away in seconds for that wind-in-the-hair experience.

To complement all of this it has a raft of safety features, for those overenthusiastic drivers who may push it beyond the limits and it has those in spades..

Now, as part of Mazda's 100th anniversary celebrations, this limited edition model, based on theGT Sport Tech,has joined a range of models marking the centenary with special modifications to a limited edition of just 100 models.

Each of the models feature white paint and a burgundy interior, plus unique badges as well as contrasting ‘two-tone' exterior/interior look inspired by the exterior of Mazda's first car: the R360.

Other additions include the anniversary badge featuring on the burgundy floor mats, on the key fob and embossed into the headrests.

Externally, the same badge is on the wheel centres and the side of the car, while the convertible features a contrasting cherry coloured fabric roof.

With a price tag of Â£29,995 the roadster is powered by the 184bhp 2.0-litre engine so there's plenty of power which is complemented by stiffer suspension and for greater stability and cornering prowess, a limited-slip differential.

All this amounts to a superb drive with oodles of power, an agile chassis and sharp direct steering, putting some of its more expensive contemporaries to shame. Throw in that super slick short throw gearshift and you have the almost perfect driving combination.

The power unit on this model now revs up to 7,500 rpm making it a real driving experience, with the engine almost daring you to take it to the rev limit for peak performance.

The extra power to the rear wheels delivers enhanced performance too, with the 0-60mph sprint achieved in 6.5 seconds, while the tuned exhaust has a throaty rasp under acceleration.

Central and brains of the car is the seven-inch colour touch-screen display and a rotary controller on the console, in addition to navigation functions, it works with compatible internet-enabled iPhone and Android smartphones and controls the impressive sound system.

On the road there are few better handling cars. It stays planted to the road on tight corners and any back end twitch is easily corrected. The ride is firm, but it's worth it for the fun factor.

Despite improved soundproofing, things can get a bit noisy with the roof down and the fat tyres on certain surfaces, at higher speeds, but that's all part of the fun.But it is quiet and refined when pottering around town.

Being a Mazda, reliability is all but guaranteed as are residual value - another reason they are so popular.

The car is quite practical for a two seater with that decent boot space, while there is extra space behind the seats for odds and ends as well as a pair of cup holders.

Safety kit is the best yet with deployable active bonnet system for pedestrian protection, front and side airbags are standard, and the side airbags feature a special bracket on the outside shoulder of the seat to protect occupants' heads even with the top down. This model adds lane departure warning, front and rear smart braking, traffic sign recognition and driver attention alert.

Still not the quickest, but more than quick enough, highly desirable and still easily one of the best drives around. Add to that around 40mpg economy and you have quite a package.

As a bonus on this anniversary edition, each vehicle will arrive with a bespoke key presentation box to be used on vehicle handover. Following delivery, the customer will also receive a limited edition book documenting the 100th anniversary of Mazda. 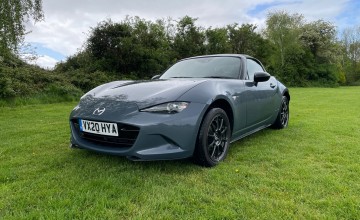 MAZDA has launched a special edition version of its popular two-seater MX-5,...

I TRIED to buy an old MX-5 a couple of weeks ago - a Mazda I've always enjoyed...