By David Whinyates on 2021-05-27 - David is one of the UK’s most experienced motoring writers and was instrumental in setting up the Driving Force syndication service for Britain’s biggest regional newspaper group. Former Chief Motoring Editor of Trinity Mirror Regionals, he is Driving Force’s Consultant Motoring Editor and a director of Driving Force Media Ltd.

MORGAN, Britain's most traditional car maker is set to adopt a practise which has been common amongst mainstream manufacturers for decades - by promising what it calls a "cyclical product enhancement programme".

Basically that means regular, and possibly annual, updates to its portfolio of traditional sports cars and it starts right now with a suite of upgrades for its Plus Four and Plus Six models.

The updates come following feedback from customers and the motoring press and, says the company, reflect Morgan's desire to evolve its products and "provide tangible customer benefits".

Not that the changes are radical. There's no change to the instantly recognisable Moggie styling other than a redesigned Morgan ‘wings badge' which has received its first update in more than a decade,

Main improvements include an all-new hood which is designed to improve usability, weather protection and refinement thanks to a revised frame structure that eliminates the requirement for hood rail fasteners and an enhanced seal package around door and sidescreen closures.

Other new features include an optional active sports exhaust system with a choice of polished silver or black tailpipes while inside the car there are reprofiled seats, a new lockable storage compartment - also optional - additional LED interior lighting on the rear bulkhead and a dual USB outlet.

Although the year isn't even half over, the upgraded models are designated as Model Year 22 and the changes are effective immediately on all new orders.

Says Morgan CEO Steve Morris: ""For 112 years Morgan has listened to its customers, offering a bespoke service that has made it famous the world over. Today, that's as much the case as it ever was, and feedback on the Plus Four and Plus Six has been carefully collated and acted on by our engineering team.

"The result of this engineering programme is the MY22 update package. The introduction of a cyclical structure to product improvement also demonstrates the progress the company has made in recent years and its new levels of commercial maturity." 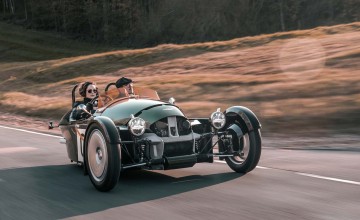