By Ian Donaldson on 2021-06-26 - Ian estimates he has driven more than 6,000 cars (so far) in a road testing career that's taken him around the world. He has spent several years as a full-time staff motoring editor and is now a busy freelance journalist

BAG one of just 100 examples of the latest Mazda CX-30 and you'll feel more like a Bentley buyer when you arrive at the showroom to collect your new wheels.

Where your car's key will be handed over in a bespoke presentation box, along with what the car maker describes as 'a beautifully crafted, limited edition book documenting the anniversary of Mazda.'

Oh, and there's also a little scale model of the Mazda R360 Coupe, the firm's first and impossibly tiny passenger car, launched in 1960 and capable of a magnificent 56mph flat out.

In fact, Mazda was founded in 1920, when it produced cork, not cars. The first of those was the tiny R360 but the car you see here references the firm's foundation, not that initial people mover.

In fact this anniversary CX-30 is a gently (and tastefully) pimped version of a top spec 'standard' car, emboldened with badges, embossed headrests and burgundy floormats.

Painted in snowflake white and trimmed in burgundy and cream leather, this special edition looks worth every penny of its asking price.

It looks like the car Bentley might make if ordered to produce something at a mere fraction of the cost of its usual millionaires' machines. If ever a car sold itself in the showroom without turning a wheel on a demo drive, this is it.

Dripping with standard kit, the anniversary edition costs £31,695. That's £1,655 more than the GT Sport Tech its built on but the price includes the pearlescent paint that would cost you another £550 on that car. So, added Bentley-ness for not very much.

Under the bonnet is a 2.0-litre engine using what Mazda calls Skyactiv-X technology that combines a bit of diesel tech to make this petrol burning machine usefully more economical and with fewer tailpipe nasties.

A mild hybrid system assists too - a small extra self-charging battery helping out through a combined starter generator and producing a useful 42.7mpg over more than 500 miles on test across a properly varied mix of roads.

That's not up to diesel frugality (Mazda doesn't sell diesels here any more) but is pretty impressive for a petrol powered SUV that's big enough to seat five in some comfort and give the view over hedges beloved of driver and passengers alike in these blown-up hatches that are taking the sales charts by storm.

It drives well too, with a deliciously precise gearchange and a ride that stays (just) on the right side of forgiving on poorer roads surfaces. The clever engine needs to be revved if you're on a mission to make your train but happily stays muted on the way. 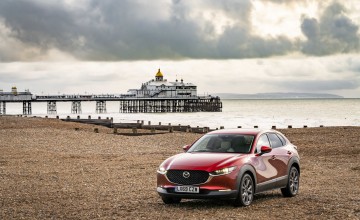 Boom time for Mazda with CX-30

THE new Mazda CX-30 enters the booming SUV sector in January.Sitting between... 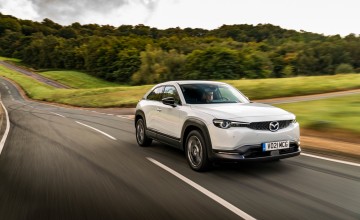 Mazda powers up for electric charge

IT was always only going to be a matter of time before Mazda joined the...