By Chris Russon on 2022-02-08 - The driving force behind Eurekar. Chris heads up a team of motoring correspondents under the Driving Force banner. Prior to Driving Force becoming independent in 2010 he was Chief Motoring Editor for Trinity Mirror Regional newspapers. Chris has been writing about cars for almost 40 years. 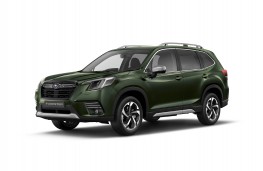 MORE safety equipment is being fitted to the Subaru Forester as the SUV gets a major refresh to mark its 25 anniversary.

Prices have yet to be revealed but can be expected to be more than the current version which starts from just over £36,000.

Over the past 25 years the Forester has sold over 357,000 units in Europe, establishing itself as one of the best-sellers in the line-up and i Its accumulated global production has reached some 4.5 million units.

The latest car is equipped with newly advanced safety technologies as standard including the fourthgeneration of the brand's EyeSight Driver Assist Technology.

the enhanced safety system features a wider field of view - almost doubled - and is available with 11 safety functions with new features such as automatic emergency steering, adaptive cruise control with lane centering and lane departure prevention which can recognise the edge of the road. It also works in off-road situations.

The pre-collision braking system has also been updated and now offers expanded support for collision avoidance at intersections.

Subaru's facial recognition technology that alerts the driver of fatigue or distraction while on the road, as well as automatically adjusting driver settings for seat position, door mirror angles, and air-conditioning preferences, is enhanced with a new gesture control function, allowing the driver to raise and lower the set temperature of the automatic climate control system through hand gestures.

Improvements have also been made to the coil springs and dampers of the front and rear suspension to provide a more refined ride and more agile handling.

As before it is powered by an e-BOXER 2.0-litre powertrain with the engine paired with an electric motor within the Lineartronic auto transmission.

For use off-road or in poor conditions the Forester has 220 millimetres of ground clearance and variable drive modes for snow, dirt and mud while a new function has been added to re-engage the car's X-Mode system at lower speeds.

Externally the updated Forester has a redesigned facia, grille, headlights and fog light covers while inside there is an eight-inch navigation system which is fully smartphone compatible.