WHEN Vauxhall launched the funky Adam city car it saw the birth of a little model designed to appeal to young people, apparently with over a million personalisation options and combinations available so that each could be made as individual as possible.

But oddly, even though it was smaller than the Corsa, it was more expensive, and this must have hit sales.

Buying one secondhand could be a long job too - as it was for a friend of mine who was buying his daughter her first car.

She wanted an Adam but they could not find one with a colour scheme and equipment combination she liked, and in the end, they bought a VW Polo.

Comfort is only fair really - not as good as some others in the class - and it's even worse with larger 17 or 18 inch wheels and tyres, which come with sports suspension and make it quite bouncy and uncomfortable at times.

It is not the most enjoyable to drive either, with electric power steering that takes all the strain of driving in town but is lacking in feedback through corners and therefore does not instil confidence. That said, it does corner safely and flat when pushed hard.

In the last year of production - 2019 - there was only one engine available - the lowliest 1.2 with 70bhp. This is good for 50 miles per gallon but takes a yawn inducing 14.4 seconds to reach 60 from rest. However, it's likely to be the cheapest Adam to insure for a young driver.

The range of petrol only engines also has a 1 litre turbo with 113bhp that reaches 60 in 9.6 seconds and can do 57mpg, and then come two versions of a non-turbo 1.4.

Finally, there is a turbo 1.4 that boasts a hot hatch 147bhp and covers the sprint in 8.2 while managing 44mpg.

As well as the standard Adam, between 2014 and 2018 there was another model called the Adam Rocks that had vague 4x4 looks, more standard kit and even more personalisation, but used some of the same range of engines and had the same performance.

Some engines were also available with a clutchless manual automatic gearbox.

If adult-sized people are riding in the Adam it is at best a three seater and for a long journey two would be even better. It also has only four seatbelts.

The back seat folds in a 50/50 pattern but the boot is only big enough for a couple of soft weekend bags if the seats are up.

The funky interior with body coloured areas was available with a huge range of colours, seat colours and combinations of trim and kit, and outside most have two tone paintwork

Some of those colour combinations were pretty in-your-face and garish as people tried to put their mark on their cars, so buying secondhand, you will have to be happy with someone else's choices.

But there should be colour and trim combinations out there to suit almost anyone if you're prepared to keep looking.

The three main trim levels are Jam, Glam and Slam and the range is topped by the Adam S with the 1.4T engine. 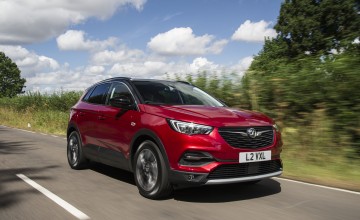