By Peter Hayward on 2022-08-05 - Peter has been writing about cars for more than 35 years producing road tests, second hand car tests, features on new and classic models, road safety and manufacturing. Has been a contributor to Auto Express, Classic Cars, Classic Car Weekly, Candis magazine and Japanese Motoring. 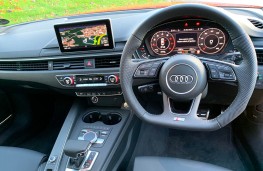 THE latest Audi A5 has been available now for six years and there was a facelift in 2020 to freshen it up.

It's one of the most beautiful production cars in the world with flowing lines that belie its more humble A4 underpinnings.

The original three door coupe was joined by a delightful two door convertible that is one of my wish list cars.

And later still, a five door coupe called the Sportback was added to give another dimension to the range for those who want easier access to the rear seats.

Here, I'll concentrate on the three door but most of the details hold true for the other two models.

All the standard cars come with a very good ride over most surfaces, but some models have lowered and stiffened sports suspension, and as with so many cars, it spoils the quality of the ride.

If you, like me, would rather be comfortable - without giving anything away to the sports suspension cars in terms of handling or roadholding, avoid them.

All Audis are beautifully built both inside and out with quality materials and top notch fit and finish.

From 2016 there have been four petrol engines and two diesels, with a very wide and bewildering range of power outputs.

I will gve figures for all the major ones, and the majority of them will come with an excellent automatic gearbox. Manuals were available in a few but are very rare.

Likewise, some will have quattro four wheel drive as standard or an option and excellent though it is, it will cost in terms of economy.

Petrol and diesel engines are all turbos as you might expect, and the petrols start with a 1.4 that has 150bhp, This covers the 0 to 60 miles an hour sprint in 8.4 seconds and is rated at 52 miles per gallon.

Diesels start with a 2.0-litre TDI that has 163bhp and while reaching 60 in 7.9, it can also achieve an excellent 68mpg with a light foot on the loud pedal.

And finally comes a 341bhp version for the S5 model only, which storms to 60 in 4.5 seconds and yet can still achieve 46mpg.

All the engines have stop/start and are immensely smooth and quiet.

The A5 is well-balanced and grippy in the corners, with good roll control and precise and well-weighted steering giving decent feedback.

Pressing on, it clings to the road surface like glue on dry roads, and of course, the Quattro system gives excellent traction in all weathers.

Inside, there are only four seats, and if you regularly carry people in the rear, think hard about buying a three door - it's rarely easy or elegant to get into them. 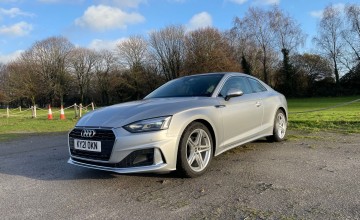