By Ian Johnson on 2013-03-17 - Ian has been a member of Driving Force since its inception. He began his career in journalism in 1962 on the Cheshire Observer and took over the paper's motoring column in 1966. Specialist areas include classic cars, product launches and automotive comment. 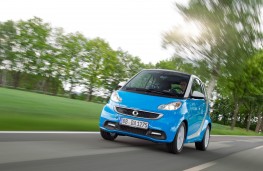 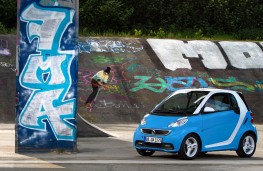 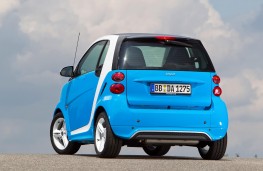 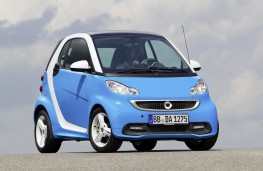 THE current boom in the number of fuel efficient city cars has a sound foundation pioneered some years ago by smart.

The iconic smart jumped in at the deep end with a quirky little two-seater which had hardly any front or rear - just a driver and passenger cell plus a small boot on wheels.

For its day the smart design may have been a little extreme, but these days the concept is making far more sense than it did.

And the company, owned by Mercedes is exploiting its qualities to the full by repeatedly introducing editions that appeal to the style conscious aiming to be seen driving the ultimate in cool.

And it does not come any more cool than the latest offering, the iceshine.

Available as a coupé or cabrio from smart retailers the fresh styling and extensive specification of this special smart are aimed at melting the hearts of motorists.

The interior includes exclusive leather-effect seats with a white fabric insert on the backrest and white stitching, a three-spoke leather sports steering wheel with shift paddles and white stitching plus white accent parts. iceshine edition logos are incorporated into the floor mats and wing mirror triangles.

Owners can chill out with the smart's audio system, which offers an RDS radio with USB and AUX ports for an MP3 or CD player as well as a pair of integrated loudspeakers.

It is also possible to further customise the car with a wide choice of options including the smart audio system navigation/multimedia, assistance package with cruise control and trip computer, electric power steering, ambient lighting and surround sound system.

Only 155 smart fortwo iceshines will be available in the UK, with customers able to choose between two petrol enginesdelivering either 71bhp or 84bhp. Prices start from £10,500.

From the driver's seat it is still the same old smart with its electric transmission which gives the option of automatic drive or manual changes via paddle shifts or the floor-mounted selector.

I found that automatic changes are still a little ponderous, the paddle shifts being much more positive.

The 71bhp three-cylinder 999cc petrol engine is lively enough with 90mph on tap and 0-62mph available in 13.7 seconds.

Combined fuel economy is 65.7mpg which is about right for an engine of this type and CO2 emissions are low at 98g/km.

But a 'could do better mark' is notched up by the car's warranty which is just two years.