By Chris Russon on 2015-08-28 - The driving force behind Eurekar. Chris heads up a team of motoring correspondents under the Driving Force banner. Prior to Driving Force becoming independent in 2010 he was Chief Motoring Editor for Trinity Mirror Regional newspapers. Chris has been writing about cars for almost 40 years. 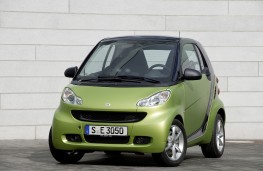 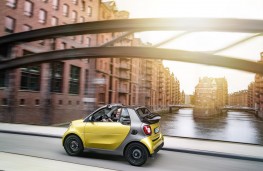 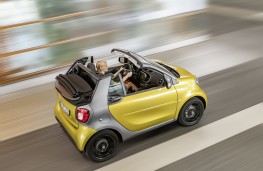 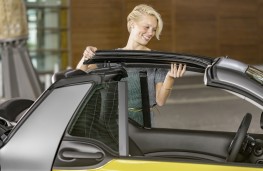 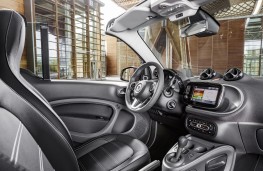 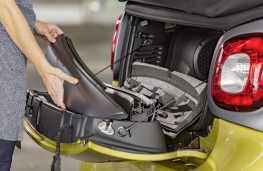 A NEW version of the world's smallest open top two-seater will be making its debut at the Frankfurt Motor Show when smart unveils its latest fortwo cabrio.

The latest generation of the tiny city car went on sale earlier this year and the open top model is due for release next February.

With its underpinnings shared with the Renault Twingo the engine on the new smart cars is slung under the rear of the car and the cabrio will be available with a choice of two, a 1.0-litre developing 71 horsepower and the other a 898cc turbo with 90hp.

They can be had either with a five speed manual box or a dual clutch semi-automatic transmission and acceleration is rated at 14.9 and 10.8 seconds 0 to 60 respectively.

Both versions of three-cylinder engine in the cabrio have official fuel economy of 65.7mpg with emissions of 99g/km making the open top not quite as frugal as the hatchback.

The fabric roof takes 12 seconds to retract automatically and the car is fitted with detachable roof rails which can be stowed in a tailgate compartment.

Smart says the roof can be operated at all speeds up to the claimed maximum of 95mph and can also be controlled remotely from the keyfob.

Three roof colours are available, red, black or a blue denim style and all have a grey lining plus additional sound insulation.

Other design changes on the cabrio include a narrower door pillar and the body itself has been reinforced for greater rigidity.

When folded, the roof and the glass rear window sit across the top of the tailgate and a wind deflector is an option.

Inside, the cabrio is decked out in similar fashion to the smart fortwo hatch and includes a facility for smartphone integration and a MirrorLink display on the dashboard mounted screen.

The open top fortwo is the smallest cabrio in mainstream production and since the first models were released some 15 years ago smart has clocked up almost a quarter of a million sales.