By Chris Russon on 2015-12-15 - The driving force behind Eurekar. Chris heads up a team of motoring correspondents under the Driving Force banner. Prior to Driving Force becoming independent in 2010 he was Chief Motoring Editor for Trinity Mirror Regional newspapers. Chris has been writing about cars for almost 40 years. 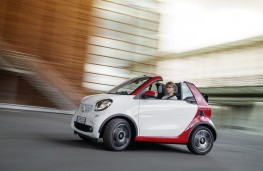 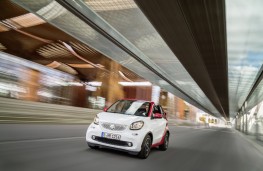 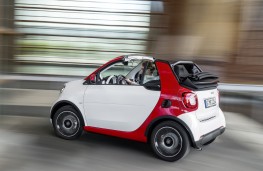 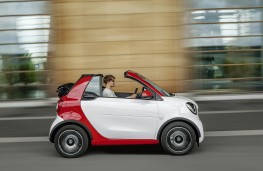 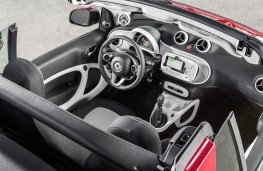 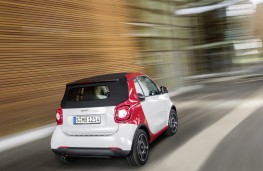 OPEN top versions of the smart city car will be on the road next spring, priced from £13,265.

The diminutive smart fortwo cabrio is fitted with an electrically-operated fabric roof that can be opened or closed in 12 seconds even at motorway speed.

Standard finish sees the roof coming in black but for an extra £115 the cloth top is available in red. A wind deflector adds a further £59 to the price.

The two-seat cabrio will be available in three trim levels with prices topping out £15,550 for a turbocharged 898cc 90hp automatic model which is claimed to be capable of returning 67.3mpg with tax-free emissions of 97g/km.

The entry level model is fitted with a 999cc engine developing 71bhp and rated at 65.7mpg giving a CO2 figure of 99g/km.

Top speed for both is in the mid-90s with 0 to 60 acceleration from the turbo taking 10.6 seconds or 14.4 for the normally aspirated version.

When folded, the top sits above the luggage compartment and the cabrio is also fitted with detachable roof rails which can be stowed within the tailgate without impacting on the 260 litre boot space.

Like the hatchback fortwo, which was launched earlier in 2015 the cabrio measure just 2.69 metres long and has a tiny turning circle of 6.95m, tighter than that of a London taxi.