By Robin Roberts on 2017-09-02 - Has had with a career spent covering the automotive industry and particularly its Welsh component suppliers - he can not only tell you what goes where but possibly who made it fit. He has been a motoring journalist based in Wales for three decades. 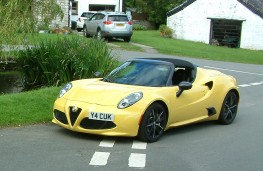 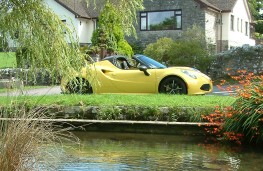 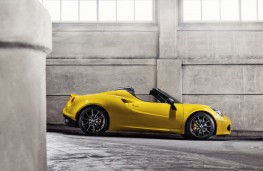 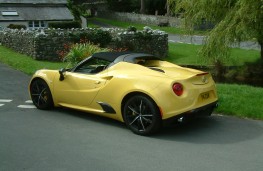 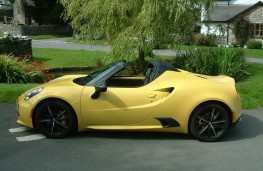 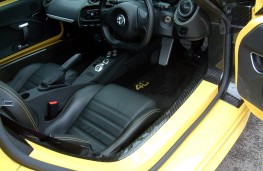 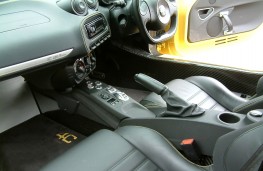 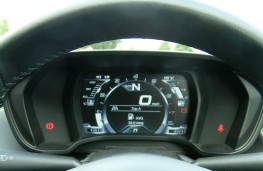 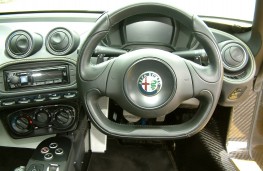 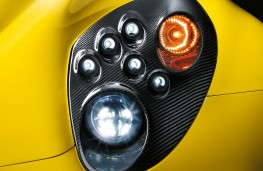 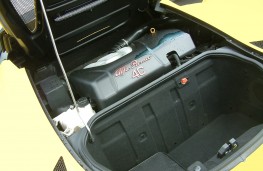 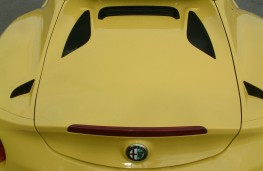 ITALIANS love their food almost as much as they love cars like the Alfa Romeo 4C Spider.

Meals can swing between the heavy classics to lighter Mediterranean morsels and they are usually all memorable.

The essential element is that every meal is meant to be enjoyed for its own sake and if you like a straightforward diet of fun, the Alfa 4C Spider will fill your plate.

It's sort of back to basics but with an Italian take on what that means so it's served in showrooms with a strong visual appeal and a serious price.

Following on from the 4C Coupe launched in 2013, the Spider is about £8,000 more and this includes a new multi-display info-system and reversing sensors along with the targa-style manual roll-up soft-top canvas roof.

It tips the scales under a tonne thanks to its carbon-fibre chassis and with some 240ps underfoot that gives it a very high power to weight ratio for lively performance and the potential of good economy.

The engine is a reasonable 1.75-litre four-cylinder shoehorned behind the two-seater cabin and with a turbo-charger it packs a punch when you get it spinning.

It's not immediately apparent from standstill, but once the blower is doing its job the power pours out and mid-range overtaking is rapidly and safely performed while it's motorway cruising is effortless.

The boosted engine has a very throaty note and is not quiet even in sixth, and added to constant road rumbles and suspension noises along with some wind turbulence the open-topped 4C Spider is akin to being in an opera-pit.

The driver conducts progress through the engine and standard sequential gearbox and you can leave it to its own devices when up and down changes can be a bit jerky or manually make selection and that was smoother most of the time.

The brakes are very powerful with good feed-back through the pedal and the parking brake held well on our slope test.

Arguably the most controversial feature is the steering. With an engine behind the driver and little upfront, the system is not power assisted and low speed parking manoeuvres can be a handful of fists and elbows twirling around the flat-bottomed wheel.

You only have to be going a few mph for the weight to reduce but it retained the positive feedback and then added a lot of twitching and writhing which some may dislike, particularly on longer journeys, so there's no mistaking where the wheels are pointing.

There is good turn-in to corners and the grip is good so long as you don't use too much throttle and bring the tail out of line, most likely on damp surfaces.

It's the way the 4C Spider rides which is possibly the spoiler for most drivers and those who may have experienced closest rivals.

You expect a lightweight sportster to be dynamic and stiff but the 4C is downright hard and bumps over even minor tarmac ridges and surface breaks.

On smooth roads its much better so long as there are no tyre-ruts to set off the steering on its own course.

The two seats are thin so do little to absorb the bumps and tall drivers might struggle to fit behind the adjustable steering column and wheel while the base is short and not very supporting. Side support, hoever is good and you have the closeness of the door to help locate as well.

Instruments and minor controls are very close to driver and convenient to use with clear dials and light actions respectively.

Heating and ventilation is generally good for a sports car, the temperature, output and direction kept the interior cosy while, with the roof removed, the turbulence was modest.

Stowing the rolled up roof presented a dilemma as it would not fit in the rear bootspace and the front compartment is effectively bolted down and unusable.

What space was under the heavy cover with its manual prop meant only a couple of soft bags or a single hard case could be carried, so you have to carefully pack for a trip.

Oddments room in the cabin was a single small leather pouch between seats, cupholder and tray with a narrow net in front of the passenger, unless you slipped stuff behind the seats or placed in the passenger footwell.

With the low driving height and thick centre pillars the rearward and over-shoulder vision is limited, it's a bit better to the sides and ok forward with good wipers and bright lights.

The engine noise trails behind at speed leaving the road and open-topped wind rumbles to penetrate the cabin and when the roof was in place the noises were considerably reduced.

Despite the shortcomings, the Alfa 4C Spider is fun to drive and I think it's the sort of car you'd keep tucked away in your stable for weekends and short trips over winding country roads.

In fact it's the sort of car you would use and go the long way around for even shorter journeys.

It looks and sounds great and it's economical as well. Looking further down the ownership road, it should also show good resale value because it's comparatively rare as well. 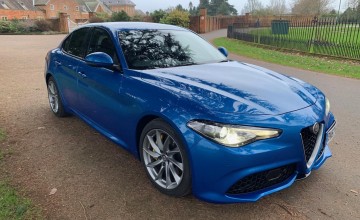 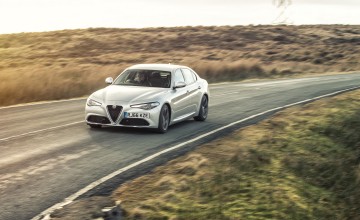 Turning the corner with Alfa Romeo

CAR sales are a series of ups and downs but there are strong signs that Alfa...