By Ian Donaldson on 2017-12-23 - Ian estimates he has driven more than 6,000 cars (so far) in a road testing career that's taken him around the world. He has spent several years as a full-time staff motoring editor and is now a busy freelance journalist

WE know other countries by a cartload of cliches - so Americans are loud, probably flamboyantly dressed and certainly a little on the large side.

If that's true about its people (some of the time anyway), the cars from the other side of the pond certainly share those traits. And not always in a bad way.

Which brings us neatly to the car on test today, the latest version of a true American icon and only now available in this sixth generation form with right hand drive.

Ford's Mustang shook up the car world in 1965 by combining a big engine, handsome lines and a relatively modest price in a way that had never been attempted before.

It succeeded beyond the wildest dreams of its creators and stands here today looking fresh and arrestingly handsome and dripping with styling clues stretching back to that game changing original.

The big engine is still there, with more than 400 horses from a rumbling V8 that stays docile as a purring tiger until you poke it with a sharp stick, when it heads for the horizon with the sort of conviction only an excess of power can provide.

For £4,350 less you can take an alternative route to modern day Mustang heaven with a 2.3-litre EcoBoost engine with four cylinders and 313bhp; actually still quick (145mph and 5.8 seconds to 62mph) but missing a chunk of Mustang authenticity.

You'll also miss the noise of that big V8 bursting into life in the morning, a pulse so smile raising it ought to be available on prescription. You'll save some fuel going the smaller engined way, but if you want economy buy a Prius, I'd say.

So, this new 'stang is powerful and handsome. It is also big; what's more of a surprise is the modesty of the price Ford is asking for its icon.

You can have a 5.0-litre version on your drive for £38,095, handily below the forty grand line that tips you into extra road tax territory, although that big, thirsty engine's tailpipe emissions mean a hefty £2,000 first year rate.

Console yourself with the knowledge that a properly big-engined Mustang is the least expensive way to this amount of V8 power you can buy new today. Almost a bargain, then.

You'll pay extra for sat nav (£795) but it's a fine offering and comes with an uprated sound system whose bass will try to bend the doors outwards. There's a poor three star safety rating, albeit an improvement on the feeble two stars gained in the original test in the absence of now standard safety systems.

The interior looks neat and tidy with everything where it ought to be but with enough hard surfaces to push home the truth that American buyers put value over perceived quality, most of the time.

Still, find a decently smooth road with open bends and give the Mustang the beans and you won't care. Quickly, its width becomes no problem at all and the mixture of fine steering and feelsome brakes make the drive a journey to remember. 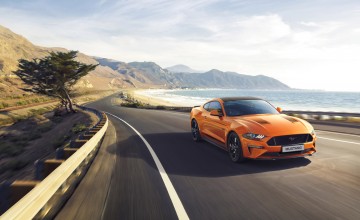