By Ian Donaldson on 2018-09-05 - Ian estimates he has driven more than 6,000 cars (so far) in a road testing career that's taken him around the world. He has spent several years as a full-time staff motoring editor and is now a busy freelance journalist

MERCEDES-BENZ has unveiled its first all-electric car, a large SUV that will take on Tesla and be built in Germany and China from next year.

The new emissions free EQC is the first Mercedes launched under the EQ brand and has a range of more than 280 miles between charges.

Power is fed by two electric motors to all four wheels with the 402bhp on tap enough for the sprint to 62mph in 5.1 seconds and a limited top speed of 112mph.

The battery, which weighs 650kg, can be charged to 80 per cent in around 40 minutes at a charging station or more slowly at home, with a Mercedes Wallbox three times quicker than a domestic power socket.

By the time the EQC is launched, 200 prototypes and pre-production vehicles will have taken part in tests covering several million kilometres across four continents (Europe, North America, Asia and Africa). The test programme comprises more than 500 individual tests.

Mercedes has clearly intended its first all-electric vehicle to look more like a conventional fossil fuelled vehicle, even down to using a conventional radiator grille (Mercedes calls it a black panel), while the Tesla Model X goes without.

Mercedes points out that power consumption and range of electric vehicles depend very much on the driving style.

The EQC supports its driver with five driving programs, each with different characteristics: COMFORT, ECO, MAXRANGE, SPORT and an individually adaptable program.

In the more economical driving modes, feedback from the accelerator pedal prompts the driver to conserve power. The driver is also able to influence the recuperation level using paddles behind the steering wheel.

The ECO Assist system gives the driver comprehensive support when driving predictively: by prompting the driver when it is appropriate to come off the accelerator, e.g. because the vehicle is approaching a speed limit, and by functions such as coasting and specific control of recuperation.

For this purpose, navigation data, traffic sign recognition and information from the intelligent safety assistants (radar and stereo camera) are linked and processed. 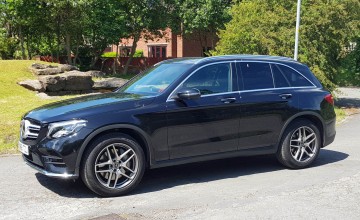