By John Murdoch on 2018-11-05 - John is regional editor for Media Scotland's Lanarkshire and Lothian titles. Three times president of the Association of Scottish Motoring Writers he has been writing about cars for over 40 years. Recently awarded lifetime membership of the National Union of Journalists and was the subject of a motion in the Scottish Parliament congratulating him on his service to newspapers. 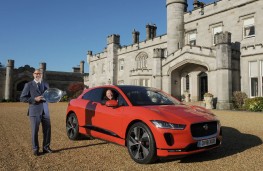 JAGUAR'S all-electric I-PACE has been crowned 2018 Scottish Car of the Year.

The all-new battery-powered SUV was named best in class of its Alternative Fuel Category by the Association of Scottish Motoring Writers before fighting off competition from the other category winners to take the top title.

It is the first time Jaguar has lifted the title since 2006 when the XK was crowned.

Presenting the award at a gala dinner in the Dalmahoy Hotel and Country Club Edinburgh, John Murdoch, president of the Association of Scottish Motoring Writers said: "The standard and variety of new models launched this year made judging difficult in all categories.

"However, from the moment ASMW members got behind the wheel of the I-PACE for the first time they were in no doubt that it was a special vehicle. The most exciting Jaguar since the E-Type, the electric I-PACE fully deserves its Scottish Car of the Year Crown.

"It looks great, drives superbly and offers all the refinement and luxury you would expect from a Jaguar. At the same time it is a great leap forward for the company and for electric cars in general. If this is the future Bring it On!"

Accepting the award, Rowdan Glover, managing director of JaguarLand Rover UK, said: "We are delighted to win this award in such an important market for Jaguar Land Rover. We are very proud that the I-PACE has been acknowledged as a game-changer, yet remains recognisable as a Jaguar, with luxury and capability at the heart of its design, along with one of the most advanced zero-emissions powertrains ever fitted to a production car. The I-PACE is an electric vehicle that's practical for everyday use and we look forward to seeing even more on the road".

"E-PACE is an incredible package of practicality geared for everyday, family life but it's also lots of fun to drive with its sports car looks and handling. We are delighted that Jaguar E-PACE has been awarded Best Premium SUV at the Scottish Car of the Year Awards: With F-PACE winning the same category in 2016, it's great to see the 'Cub' having its deserving moment in the spotlight".

The SCOTY awards also produced double results for Ford and Kia. Ford's new Focus took the Family Car title 21 years after it lifted the overall title back in 1998. The company's Ranger also took the Pick-Up title. The Kia Stinger took the Executive Car title while the talented Sportage which won the overall SCOTY title back in 2010 was voted Best Used Car on a good night for the Korean company.

Hyundai's Kona defeated stiff competition to take the Small Car title while the Peugeot 5008 took the Family Crossover Award. Jaguar's E-PACE was the winner of the Premium Crossover award while Vauxhall's Insignia Country Tourer came out tops in the Four-Wheel-Drive category.

The Estate Car title was awarded to the Volvo V60 while Suzuki's entertaining Swift Sport took the Hot Hatch title. The Sports Car title was won by the blistering BMW M5.

Finally, Mazda took the Innovation and Technology award for their continued development of the internal combustion engine resulting in a new Spark Controlled Compression Ignition (SPCCI) system which delivers more power, better economy and a cleaner burn for lower emissions.

THERE'S no doubt the world's car makers are on the journey to...